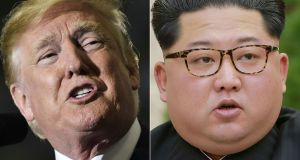 The rapprochement between Donald Trump and Kim Jong-un will rightly be welcomed, but there is plenty of history to suggest that the risk of failure in the comign talks is high. Photograph: Mandel Ngan/AFP/Getty Images

The date and venue are set: Donald Trump and Kim Jong-un will meet on June 12th in Singapore for the first summit between the leaders of the United States and North Korea. The moment will be all the more remarkable for the rapid turnaround in relations that have made it possible. Just six months ago, Kim was ridiculing the “deranged dotard” in the White House while provocatively firing long-range missiles over Japan. Trump responded to “rocketman” by threatening him with “fire and fury like the world has never seen”.

The rapprochement will rightly be welcomed, in particular on the Korean peninsula, where generations have lived with the threat of war, but also across Asia and further afield. If Trump can succeed in persuading Pyongyang to give up its nuclear weapons and put in train a process leading to long-term peace along the 38th parallel, it will be a landmark achievement.

But there is a long way to go, and plenty of history to suggest that the risk of failure is high. In 2000, the then president of South Korea, Kim Dae-jung, won the Nobel peace prize and sipped champagne with this Northern counterpart, Kim Jong-il, after talks that appeared to hold out the promise of peace. The initiative went nowhere. On that and several other occasions, Pyongyang has agreed to talks on its nuclear programme, taken the benefits (usually food, cash or a relaxing of sanctions) and then pulled the plug.

The meeting with Trump will be a propaganda coup for Kim, showing his people and the world the clout that going nuclear has given him. The talks will buy the regime time while allowing it to argue for an easing of sanctions and, ultimately, the removal of US troops from the peninsula. Meanwhile, nothing North Korea has said suggests it is ready to budge on its nuclear arsenal. At a meeting with US Secretary of State Mike Pompeo in Pyongyang this week, North Korean foreign minister Kim Yong-chol made a point of reminding his visitor that “we have perfected our nuclear capability” – hardly the words of a man preparing to give up his strongest card.

1 50 best Irish albums of all time – in order
2 ‘At night I would go to my room to quietly drink.’ Irish women and addiction
3 Keith Duggan: Bubba Wallace tweet shows just how troubled Donald Trump’s mind is
4 Hundreds of substitute teachers may be hired full-time to keep schools open
5 Pat Leahy: Fianna Fáil acting like a circular firing squad
Real news has value SUBSCRIBE