The Irish Times view on a smartphones and children: a ban is not the answer 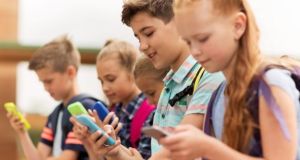 There are, of course, risks with phone use. That is why we need young people to be able to use social media safely. Photograph: iStock

Smartphones can seem like a curse of the modern age: at home, on trains, at work and school, there is no escape. For children, especially, they have been linked to disrupted sleep, cyberbullying and shortened attention spans.

It is tempting to think that an outright ban on smartphones for young people will solve all of these problems. But most research tells us that prohibition does not work. Smartphones are incredibly powerful tools which are central to the way we live now. That is why clear and workable ground rules on their use, whether set by parents or schools, make more sense.

Most schools, for example, have long-standing policies in place to stop phone use in schools. At primary level, many schools require they are either turned off or handed in during school hours. Many second-level schools allow phones for research in certain classes, subject to the supervision of a teacher. This week we learned that many boarding schools also have strict policies to limit students’ screen-time, which are proving popular with parents. In general, schools report a high degree of compliance with these policies.

Parents, too, should be encouraged to have firm rules at home. Many experts advocate an approach inspired by Michael Pollan’s well-known diktat on food: “Enjoy screens. Not too much. Mostly with others”. There are, of course, negatives with phone use. Education is the most important and effective protective measure to combat the risks of social media. We need suitable support and investment in measures to equip young people to deal with what can be a challenging digital environment. Parents also need to educate themselves and engage with their children – the task cannot be outsourced to schools.

Reaching adolescence brings with it exposure to a range of risks. Many of them are simply part of life. We teach children to cross the road; we don’t ban all vehicles. We need to set rules and support young people to use smarphones safely and sparingly. Policing, rather than prohibition, is the best solution.

1 Steve Coogan: ‘Come Out, Ye Black and Tans is two fingers to the British’
2 Ben Affleck: ‘It took me a long time to admit I am an alcoholic’
3 Parties to continue talks with Sinn Féin despite Drew Harris’s IRA comments
4 Drug dealer loses codes for €53.6m bitcoin accounts
5 L’Arche founder implicated in sexual abuse of women
Real news has value SUBSCRIBE