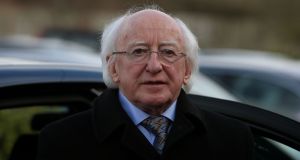 President Michael D Higgins is to be commended for expressing “deep and profound concern” that history will no longer be a core subject at Junior Certificate level. The decision to remove history as a core subject was taken some years ago and will come into effect from next September, when just three subjects – English, Irish and maths – will be mandatory core subjects.

It is ironic that at a time when the State is involved in promoting the decade of centenaries programme to mark the achievement of Irish independence a century ago, one of its arms, the Department of Education, has decided to downgrade history.

As the president said at the at the launch of the four-volume Cambridge History of Ireland, history is the inheritance of all our people and a Republic worthy of its name would seek to make it accessible to as many people as possible.

President Higgins was absolutely right to point out that a knowledge of history is “intrinsic to our shared citizenship, to be without such knowledge is to be permanently burdened with a lack of perspective, empathy and wisdom”. It is particularly important in this era of fake news that all of those going through the education system should receive a grounding in history.

Leaving young people ignorant about what happened in the past and depriving them of the skills to interpret a variety of sources will not equip them to confront a world in which information is increasingly disseminated without historical perspective or even regard for the truth.

The history curriculum taught in our schools is an extremely good one. It treats the complexity of the past in a comprehensive and detailed manner and does not attempt to impose a simplistic patriotic narrative of the events that shaped the country. It is strange, to put it at its mildest, that the decision to eliminate history as a core subject has come at a time of unprecedented interest in the past. This applies not only to the huge public interest in the events of the decade of centenaries but to the surge of interest in family history.

Online access to the 1901 and 1911 census records, provided by the National Archives free on the internet, has allowed people to delve into their own family histories in a way never before possible. It has enabled people not simply to satisfy their curiousity about their grandparents and great grandparents but to begin to understand what life was like for earlier generations. There is no better way of gaining a real understanding of the past than finding out about how our own ancestors lived.

At a time when sources of historical information have been made more widely available than ever before, the decision to remove history as a core subject in schools is all the more incomprehensible.