The Irish Times view on Karl Marx: The communist manifested 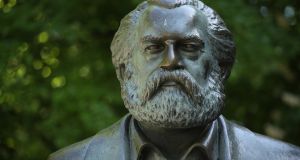 Karl Marx, born 200 years ago this month, was a man of huge gifts who bequeathed to his followers an impressive intellectual legacy spanning economics, philosophy, history and politics. Photograph: Sean Gallup/Getty Images

Karl Marx, born 200 years ago this month, was a man of huge gifts who bequeathed an impressive intellectual legacy spanning economics, philosophy, history and politics. He also had an extraordinary capacity to make enemies of near allies. That inheritance too has passed down to today’s Marxists.

Socialists in the generation after Marx often focused on reforms, winning significant improvements in workers’ living standards while still paying lip service to the Marxian idea of revolution. One of the most impressive, France’s Jean Jaurès, practised constitutional politics but did not entirely exclude revolution, which could be “the last resort of history held at bay”.

From 1917, however, the Bolsheviks became the model for most Marxists after successfully defending their revolution against native reaction and foreign intervention. Seizing power was one thing, however; holding onto it in the long term another. In Marxist-Leninist practice this was done by using violence against enemies and perceived enemies, often a lot of violence. Those who objected to the human cost of such “defence of the revolution” were told “you can’t make an omelette without breaking eggs”. The breakages were obvious, but the omelette often proved inedible.

Russia and China may have abandoned communism, but Marxism lives on. It is an important intellectual current in the universities and is part of the mix of ideas influencing the vigorous new popular movements that have arisen to the left of social democracy. Capitalism may generate wealth, but it also produces gross inequality and environmental degradation. Many people seem to think Marxism might have the answers.

It has been said that Marx cannot be blamed for the mistakes, or crimes, of “Marxists” who lived after him. This is true but beside the point. Today’s Marxists have to prove that they can win power and use it in a way that is widely beneficial. But more importantly, they need to demonstrate they can hold onto it without the bloody repression which almost all Marxist revolutionaries over the last 100 years seem to have found indispensable.