The Irish Times view on the Supreme Court standoff: a crisis that was waiting to happen 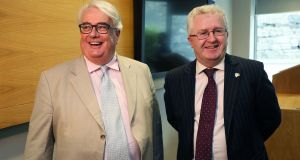 The release by Chief Justice Frank Clarke of parts of his recent correspondence with his embattled colleague Seamus Woulfe has pushed the standoff between the court and its newest member into a different dimension, raising the prospect of an unprecedented impeachment motion by the Oireachtas to remove a sitting judge of the country’s highest court. Photograph: PA Wire

The failure of successive governments to put in place a system for dealing with judicial conduct has long been a crisis waiting to happen. Now that crisis has arrived, and in spectacular fashion. The release by Chief Justice Frank Clarke of parts of his recent correspondence with his colleague Séamus Woulfe has pushed the standoff between the court and its newest member into a different dimension, raising the prospect of an unprecedented impeachment motion by the Oireachtas to remove a sitting judge of the State’s highest court.

The letters make clear that the relationship between Clarke and Woulfe has broken down. It is difficult to see how they can ever work together. It is also clear from Clarke’s letters that the court, excluding Woulfe, is now of one mind on the damage it is incurring from the controversy that began with the Oireachtas Golf Society dinner in August. While Clarke does not say that all members of the court believe Woulfe should resign, he does refer to the “unanimous” view of the group that the “cumulative effect of all of these matters has been to cause a very significant and irreparable damage both the court and to the relationship within the court which is essential to the proper functioning of a collegiate court”. These are extraordinary words, comparable only in recent decades to the 1999 report by then chief justice Liam Hamilton on the Sheedy Affair, which led to the resignation of Hugh O’Flaherty from the court.

The absence of a functioning Judicial Council has been costly for everyone involved. The judiciary, technically powerless to respond to the public clamour for action over the controversy, found itself scrambling to improvise an ad hoc process to review Woulfe’s actions, while Woulfe himself had to navigate that process without the benefit of established structures and procedures to set the ground rules for an inquiry.

There can be no doubt about the damage being done to the judiciary. Woulfe has clearly compounded his original error in attending the Clifden golf dinner by a number of serious misjudgments. His at times legalistic insistence on relatively narrow points, and on his larger sense of personal grievance, appears to have blinded him to the broader crisis that the court is now contending with. But the court’s actions in publicly distancing itself from one of its members also raise far-reaching questions whose implications will go beyond the current controversy.

The upshot is that the Government has been handed a huge dilemma. The Coalition’s two biggest parties, Fianna Fáil and Fine Gael, have only themselves to blame. They have rotated power between them since the idea of a Judicial Council was broached late in the last century. For all those years they proved unwilling and incapable of putting in place a system to deal with a crisis they were warned would come.