The Irish Times view on immigration: Politicians must act responsibly 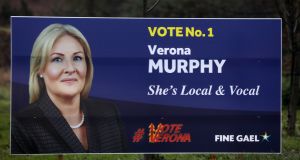 ‘The comments by Fine Gael Wexford byelection candidate Verona Murphy about the alleged infiltration of Islamic State supporters into this country were not simply false – they were dangerous.’ Photograph: Eamonn Farrell/RollingNews.ie

The recent emergence of racist language in mainstream Irish politics has been a disturbing development. Two candidates in next week’s byelections have had to apologise for saying unacceptable things about asylum seekers and Travellers, while a TD has been utterly irresponsible in the way he has attempted to stoke fears about immigrants from Nigeria.

The comments by Fine Gael Wexford byelection candidate Verona Murphy about the alleged infiltration of Islamic State supporters into this country were not simply false – they were dangerous. Propagating falsehoods about immigration is the first step on the road towards legitimising suspicion or even hatred of foreigners.

Murphy expressed deep regret for her comments and apologised to Syrian refugees being housed at a centre in Dungarvan, but it begs the question: how could a serious candidate from the ruling party make such claims in the first place?

On the other side of the political fence, Fianna Fáil Dublin Fingal candidate Lorraine Clifford-Lee was at the centre of a political storm over derogatory remarks she made about Travellers. Those comments were made on social media some years ago, but at the time she was a member of the Fianna Fáil national executive and should have been aware of the consequences of making such hostile comments about a minority group. She too has offered a full apology.

All of this followed the false claims made by Independent Galway TD Noel Grealish about the source and scale of remittances sent from here to Nigeria. He had already made inflammatory comments about a proposed centre for asylum seekers in Oughterard, Co Galway, so it seems that he has decided that attacking immigrants is a vote winner. He is probably taking a leaf out of the political playbook of Peter Casey, who managed to propel himself into second place in last year’s presidential election by attacking Travellers. He didn’t fare as well in the more recent European elections but he still garnered a substantial vote.

Anti-immigrant and anti-Traveller claims need to be challenged robustly if this country is to avoid the virus that has infected so many other countries. To their credit, the vast majority of our politicians have spoken and acted with great responsibility and have not sought to generate fears among the general public about immigration.

Ireland has in a very short time gone from being a country of emigrants to one which has attracted a significant influx of people from all over the globe. Immigrants now account for more than 15 per cent of the population. This has enriched our country and has not coincided with the rise of an organised anti-immigrant force in politics. One of the main reasons for that has been responsible political leadership. It would be a tragedy if recent events were to mark a change in that healthy political consensus.