The Irish Times view on Germany and the CDU: Europe’s next worry

Brexit can no longer distract from Germany’s political, economic uncertainty 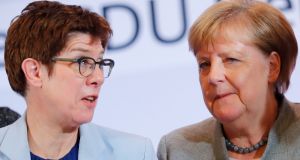 At the headquarters of Germany’s ruling Christian Democratic Union, a massive red acronym – CDU – stands in the first-floor atrium. Until Thursday, that is, when Greenpeace activists strolled out the door with the oversized polystyrene C.

Within minutes the missing C was posting selfies on Twitter from around Berlin, warning that the party’s “Christian” moniker was ill-placed because “protecting creation means protecting the climate.” CDU leaders, in Leipzig ahead of today’s party conference, struggled to contain their embarrassment.

Angela Merkel, once dubbed the “climate chancellor”, now admits Germany will not meet its 2020 climate goals. She looks back on 14 gruelling years in office in almost permanent crisis mode, dominated by efforts to stabilise the euro and defend German business interests.

Whether on EU strategy or on the world stage, Germany remains less bold actor than cautious reactor

And now, a year after she stood down as CDU leader, her party is slipping into a political identity crisis. Dr Merkel lingers on – hobbling attempts by her successor, Annegret Kramp-Karrenbauer, to establish her authority and retool party policy. Her Social Democratic coalition partners are on the endangered list while the Green Party is breathing down the CDU’s neck.

After a decade prioritising fiscal restraint, the flip side of balanced budgets is now coming home to roost: indebted German municipalities, a crumbling road and rail network and a mobile phone network ranked worse than Bulgaria’s.

On Monday, outside a government away-day, a television journalist’s live report on its plans to close massive mobile coverage dead zones was cut short – by an overloaded mobile phone network.

Whether on EU strategy or on the world stage, Germany remains less bold actor than cautious reactor. A proposal from foreign minister Heiko Maas for a Nato working group may prove a timely response to Emmanuel Macron’s”brain death” diagnosis – or more defence can-kicking.

Brexit Britain’s long-running Punch and Judy show can no longer distract from Germany’s political drift and economic uncertainty. The EU’s largest member state is the bloc’s next worry.