It will take a monumental shift in the propensity of Irish courts to offer awards in personal injury cases with little regard for policyholders, who ultimately carry the cost 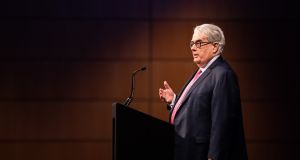 Navan businesswoman Linda Murray, who leads a group of over 60 play centres that faced closure this year as they struggled to get insurance, had two simple questions when she stood up at an conference on insurance fraud in Dublin on Tuesday. “When will business owners see premiums coming down?” she asked. “And when will insurers in Ireland insure the leisure business in Ireland?”

The truth is that it will take a monumental shift in the propensity of Irish courts to offer awards in personal injury cases with little regard for policyholders who ultimately carry the cost and in the broader cultural acceptance of people lodging false and exaggerated claims. This ranges from a cultural reticence to report others’ fake claims to a failure by the legal system to punish those who are caught. The incentive for fraudsters is clear. The Personal Injuries Commission found in 2017 that compensation for whiplash claims in Ireland was running at an average of €17,388, more than four times the rate in the UK.

Michael Whelehan, head of claims at the IPB Insurance, the State’s largest public sector insurer, which handed out €113 million against claims last year alone, told the conference that the normalisation of insurance fraud in Irish society is “providing an income supplement to the morally challenged”. Even claimants in blatantly false and inflated cases that are unmasked in civil court cases typically find themselves avoiding costs being imposed on them. Last month, The Irish Times reported that a Mater Hospital study found that over 90 per cent of patients with whiplash attending its pain management clinic failed to return for additional treatment once their legal action was completed. Or, as Whelehan put it: whiplash in Ireland is often cured by “an application of cash to the affected area”.

But while a civil court may decide on the balance of probabilities that a claimant’s injuries are faked or exaggerated, these cases are almost unprosecutable at a criminal level, where the burden of proof factor is raised to beyond reasonable doubt. There is great hope that the Judicial Council, being set up under laws enacted in July, will pave the way for court awards for personal injury to fall and become more consistent.

Chief Justice Frank Clarke said he had identified members for a personal injuries guidelines committee to set awards guidelines. However, he was unable to give timelines for when the Council will be established. While the personal injuries committee will be able to start carrying out its research in the interim, the massive benchmarking of awards against other jurisdictions will take time if it is to avoid legal challenge. It’s difficult to see a report being completed by the middle of next year. None of which offers much hope, in the near term at least, for Linda Murray and tens of thousands of other policyholders.