The Irish Times view on protests in Iran: A glimpse of rising anger 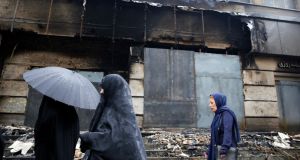 Iranian women pass a branch of the Iranian Melat Bank that was burned during the protests over increasing fuel prices in the city of Shahriar, Alborz province, on Wednesday. Photograph: Abedin Taherkenareh/EPA

Remarkable scenes of unrest on the streets of Iranian cities have provided a rare glimpse of rising discontent within the Islamic Republic, while the regime’s brutal response shows the lengths it will go to in attempting to suppress any challenge to its authority.

The spark for the latest convulsions was the announcement last Friday that petrol prices were to rise by at least 50 per cent and that fuel rationing was to be imposed. While the protesters’ initial grievance was ostensibly economic, their demands included a call for clerical leaders to step down. At least 100 banks and dozens of buildings and cars were torched over a number of days, state media reported.

The state’s response was swift and violent. Citing witnesses, verified videos and information from activists, Amnesty International said at least 106 protesters in 21 cities had been killed, while the UN human rights office said it had received dozens of reports of killings. Iran dismissed Amnesty’s reports as “baseless allegations and fabricated figures” but said about 1,000 protesters had been arrested. The regime switched off Iran’s internet, but eyewitness reports and videos continued to circulate thanks to many Iranians’ ability to circumvent the shutdown.

The unrest appears to be the most significant since late 2017, when thousands took to the streets in protest over high unemployment and rising inequality. But while those demonstrations were instigated by a hardline group that aimed to destabilise the rule of President Hassan Rouhani, a regime moderate, this time the focus of the protesters’ anger appears to be the regime itself.

Rouhani claimed victory yesterday, by which time the streets appeared to have calmed, and without citing evidence blamed foreign enemies for the disturbances. The regime can argue that US sanctions have caused the currency to plummet and wiped out Iranians’ savings. But the regime itself is squarely to blame for the corruption and waste that the protesters decry. The appalling brutality of the state’s response suggests a deep-seated fear in the corridors of power.