The local property tax was to be transformative for local government funding. It hasn’t worked out like that 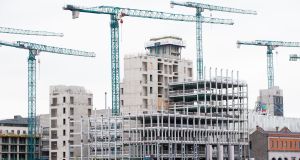 Dublin City Council should be on the pig’s back. After a decade of austerity, the city council’s coffers should now be fattening up nicely, with commercial rates, construction levies, the Local Property Tax (LPT) and all the other fees and charges which accrue when the tide rises. It is not the case. Council chief executive Owen Keegan says “despite a relatively benign economic environment” the city will be seriously strapped for cash next year, largely due to central Government tightening of the purse strings and showing a “lack of understanding of the funding challenges” the council faces.

The LPT introduced in 2013 was to be transformative for local government funding, with taxes raised locally paying for local services. It hasn’t worked out like that. The bulk of the LPT has replaced funding from the Government, with the city receiving less funding, compared with other local authorities, than it did before the charge was introduced. Out of the €80 million collected in the city just €4 million is available for “discretionary” services – the needs of local communities, such as paving repairs and playgrounds – identified by councillors. The result of having householders pay LPT is that they expect more but are getting less.

The councillors haven’t helped matters by voting to give Dublin homeowners a 15 per cent discount, but they argue that the good would be taken out of implementing the full charge anyway, with 20 per cent of Dubliners’ rates going to fund services in rural local authorities.

Keegan argues the worst blow to the council’s finances is the decision to give commercial rates raised on properties owned by Irish Water in the city to other local authorities. Rates on Irish Water properties would amount to €23.6 million but the council is getting €14.6 million, with the rest being distributed nationally. As a result of these losses, Keegan is asking councillors to approve a budget which includes increased parking charges, tolls, social housing rents, and commercial rates. It’s an unpalatable choice and the city – and its citizens – deserve better.