The Irish Times view on road safety: Policy and publicity

Now the Minister wants to revise speeding penalties. Once again, Ross is swimming against the tide of expert opinion 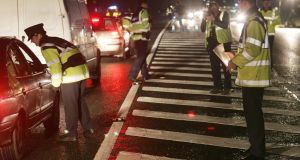 It’s not just Independent TDs and backbenchers who become increasingly reckless in their search for publicity as an election approaches. Government Ministers are equally adept at pivoting into the limelight. The past few weeks have thrown up a number of crude racist interventions by TDs and byelection candidates involving asylum seekers and the Travelling community. More sophisticated media operators tend to present themselves as champions of the public good.

Minister for Transport and Sport Shane Ross falls into the latter category. His contribution to road safety and a reduction in the death toll have provided him with positive publicity.

There is no doubting Ross’s genuine concern to reduce the incidence of drink-driving and save lives. But his appetite for headlines is such that he sometimes ignores the advice of experts and officials. That happened with legislation involving an overtaking space for cyclists. The Attorney General rejected it as unworkable and Ministers voted it down, although welcome new provisions toughen the penalties for those who overtake cyclists in a dangerous manner.

Now the Minister wants to revise speeding penalties. Once again, Ross is swimming against the tide of expert opinion. He proposes a €2,000 fine for motorists who exceed the speed limit by 30 km/h. He also favours a reduction in penalties for minor offences.

An estimated 120,000 motorists have failed to take driving tests and operate on a succession of provisional permits

Legal experts, gardaí and the AA have rejected the scheme but, with an election pending, it is unlikely to go away. The same can be said of Danny Healy-Rae’s proposal that Kerry farmers should receive special permits to drive home after drinking two pints.

Far more serious issues threaten road safety. An estimated 120,000 motorists have failed to take driving tests and operate on a succession of provisional permits. Thousands of disqualified motorists continue to drive because a requirement to hand up their licences in court has not been enforced. These are intractable administrative issues that could take years to resolve. It is easier to issue a pre-election press release.