The Irish Times view on e-cigarettes: When the smoke clears 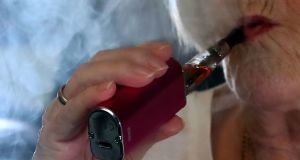 The potential risks of vaping came to light in recent months in the US. Photograph: Peter Byrne/PA Wire

That the last five years have seen the percentage of the population who smoke falling from 23 to 17 per cent must rank as the premier public health advance of recent times. The figures are revealed in the latest Healthy Ireland survey from the Department of Health. Of particular interest is that over the same period the number of people who said they were e-cigarette users increased from 3 to 5 per cent of the population. This means there are about 246,000 people – or roughly one in 20 of the population – who vape.

The de facto role of e- cigarettes in smoking cessation is underlined by the survey finding that among those who made an attempt to quit, some 38 per cent used e-cigarettes during their efforts.

With Ireland having one of the highest per capita consumption of e-cigarettes in the world, a pressing question is: how safe is vaping? The potential risks came to light in recent months in the US, where more than 500 cases of severe lung disease linked to the use of e-cigarettes have been identified. While most are associated with users adding contaminants to the liquid vaping solution, and have not been replicated in other countries with tighter regulatory regimes, the emergence of “vaper’s lung” is a source of concern.

However, an editorial in the British Medical Journal states that there is now “strong consensus that vaping is substantially less harmful than smoking”. Public Health England has issued advice urging doctors and others to include e-cigarettes among the tools used to help patients quit smoking. Here, an investigation by the Health Information and Quality Authority (Hiqa) concluded that vaping is potentially safer than smoking.

It would appear that if current smokers want to give up smoking and are considering vaping, they should use standard devices and avoid contaminants. The short-term risks of such an approach appear low. But there is more uncertainty regarding the long-term risks of e-cigarette use. It could take up to 20 years of research to establish whether any of the potentially toxic substances produced by vaping are harmful to human health.