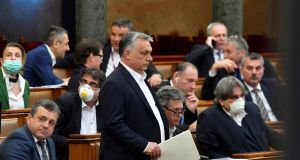 Hungarian Prime Minister Viktor Orban arrives to attend the plenary session of the Parliament ahead of a vote to grant the government special powers to combat the coronavirus disease (COVID-19) crisis in Budapest, Hungary, March 30, 2020. MTI Zoltan Mathe/Pool via REUTERS

European Commission President Ursula von der Leyen did not mention Hungary by name, but her target was clear. A day after Viktor Orban’s parliament passed by 137 to 53 powers giving him the right to rule by decree indefinitely and to jail publishers of false reports on coronavirus, she insisted that democracy must not also become a casualty in the campaign against the virus. “Any emergency measures must be limited to what is necessary and strictly proportionate. They must not last indefinitely. Moreover, governments must make sure that such measures are subject to regular scrutiny,” von der Leyen said. The Commission promises it will closely scrutinise the new legislation.

But Orban has form. Hungary is already a subject of internal EU disciplinary investigation under article 7 of the treaty following legislation curbing the judiciary, media and foreign universities. He has treated the rule-of-law process with contempt even though it could ultimately see his country’s EU voting rights suspended.

Although Orban’s Fidesz party commands a substantial parliamentary majority, the government bill has suspended the chamber’s right to approve extensions to emergency rule, postponed all elections and referendums, and suspended the enforcement of several laws. Those who publicise untrue or distorted facts which could interfere with the protection of the public, or alarm or agitate a large number of people, now face several years in jail.

A petition of more than 100,000 people has opposed the moves, and there have been protests from the UN, Council of Europe, European Parliament and multiple fellow EU member states. Hungary’s liberal opposition said it would back emergency measures but insisted that it needed a sunset clause. The government rejected that. Asked who would decide when the emergency could be declared over, justice minister, Judit Varga said: “Life will give the answer to this. I’m not a doctor, I’m not a scientist, but I think it will be crystal clear for everyone in Europe when the crisis is over.” In other words, just trust Viktor Orban.