The Irish Times view on coronavirus in Africa: The rich world’s responsibilities 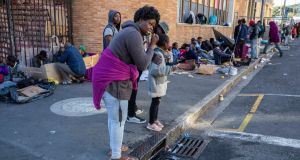 It is perhaps inevitable that we are preoccupied by the news of the pandemic’s progress closest to home. These are our people, our family, our colleagues, who are becoming infected, and dying. And this island is where we, and our Government, are working to contain it.

And yet we forget or overlook at our peril the global reality of this pandemic. Global, because it will not be contained to this island. Global, because no one country can self-isolate in this age.

Global, ultimately, because every inhabitant of a Cairo slum, every rice farmer in China, or tea picker in Sri Lanka, is also one of us, not just sharing our humanity, but someone on whose health and survival we depend as much as our most immediate neighbour.

Take Africa. The spread has been slower so far, but most countries have now instituted controls, adopting a slew of measures, from business closures to handwashing stations and checks at airports. Countries such as South Africa, Kenya, Ghana and Gabon have banned flights from affected countries, while Morocco has suspended all international travel. Rwanda, Mali and the Democratic Republic of Congo have quarantined travellers from countries affected by the outbreak. South Africa plans to erect a fence on its border with Zimbabwe to keep out migrants.

Although only 4 per cent of Africa’s population is in the highest-risk age category of over-65, a major unanswered question is how malnutrition, HIV-Aids, tuberculosis, malaria or other chronic conditions will interact with coronavirus. The result could well be that Africa has significantly higher death rates than elsewhere.

Containing the spread is going to be difficult. More than 70 per cent of African city dwellers – approximately 200 million people – live in crowded city slums, with limited access to plumbing or electricity. Some 40 per cent of Africans live in water-stressed environments. Simple measures such as social distancing and frequent handwashing may be all but impossible.

Most still have poor public-health infrastructure and weak social-welfare systems, and one-third of African countries are either already facing a debt crisis or at high risk of one. Economies that had been showing strong signs of growth have been hit by collapsing trade and broken supply chains, not least from China.

African states do not have the domestic capacity to manufacture respirators, medicines or medical supplies. They will be relying on humanitarian shipments from donor nations like this one, whose own economies have been hit, and whose own hospitals may be overwhelmed and under-resourced. We must also find the resources for emergency debt relief. This global crisis requires global solutions. Whatever the challenges at “home”, the developed countries cannot turn their backs on Africa at this time.