The Irish Times view on the Troubles: A major policy shift 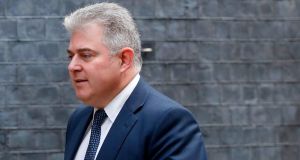 A new approach to examining killings during the Troubles being proposed by Northern Secretary Brandon Lewis has run into strenuous opposition. Nationalists have objected to what they see as a device to exempt the British Army from its responsibilities and Tánaiste Simon Coveney has been cool in his response.

Lewis is proposing to establish a new single body to primarily focus on information recovery and reconciliation rather than investigating Troubles-related killings.

This marks a significant change in policy. The 2014 Stormont House Agreement envisaged a historical investigation unit to investigate Troubles killings; an independent commission on information retrieval where perpetrators could tell the truth about their involvement in Troubles killings without fear of prosecution; and an oral history archive where victims and others could tell their stories of the conflict.

Lewis says his approach will place a greater emphasis on gathering information for families; moving at a faster pace to retrieve knowledge before it is lost; and doing more to help individuals and society to share and understand the tragic experiences of the past. While the Northern Secretary has not totally ruled out investigating some past killings, he said he wants to end the cycle of reinvestigations into the Troubles that has failed victims and British army veterans alike.

Official figures issued last year showed that the PSNI Legacy Investigation Branch had a caseload of 1,130 cases touching on the deaths of 1,421 people. Lewis maintains that given the considerable time that has elapsed since many of these incidents took place it is vital that an effective information recovery mechanism is put in place before this information is lost forever.

The move is widely seen by nationalists as a response to continuing pressure, some of it exerted by British prime minister Boris Johnson, to devise legislation that will prevent prosecutions of former British soldiers involved in Troubles-related killings.