The Irish Times view on Covid-19 in the UK: fantasy as policy 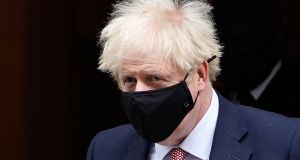 The Boris Johnson vision of a green, prosperous post-Covid Britain, reinvigorated by Tory plans, omitted reference to where it stands now, or how the British people will reach this “new Jerusalem”. Photograph: Niklas Halle’n/AFP via Getty Images

‘Alot of nonsense”, Boris Johnson assured his virtual Tory conference on Tuesday of suggestions his bout of coronavirus had sapped his “mojo”. What is clear is that the British prime minister has not lost his capacity for nonsense – his speech was full of Churchillian bluster and exceptionalism about the UK seeing off “the virus like every other alien invader for the last 1,000 years”.

But the Johnson vision of a green, prosperous post-Covid Britain, reinvigorated by Tory plans, omitted reference to where it stands now, or how the British people will reach this “new Jerusalem”.

No mention of a pandemic that is out of control, or the “bumpy” winter he admitted on Sunday they will face. The UK’s R number has risen to 1.3-1.6 (it is 1.5 in Northern Ireland), and the death toll on Tuesday hit 42,445, by a wide margin top of the European league. Its “excess death” toll per million – Johnson has described this as the best comparative measure of past and expected death rates and of the pandemic’s effect – puts the UK globally behind only Peru, Ecuador and Spain.

No mention of the expected one million rise in unemployment this winter after the government furlough scheme ends this month. The Resolution Foundation, a think-tank, predicts that will affect some six million families, leaving dole at its lowest in real terms in three decades. Next year the poorest fifth of households will face a further 7 per cent income loss.

No mention, among other lacunae, of the most recent track and trace fiasco – a computer code design error which deleted every entry after the millionth, and left at least 16,000 people in ignorance of their contact with a Covid-19 case.

Little wonder then that his government’s handling of the pandemic is not trusted by the public. YouGov polling finds disapproval continuing to rise. Around 65 per cent now say the government is doing a bad job, compared with 20 per cent in late March, when the lockdown began. With public buy-in so low, it would seem that Johnson himself is the UK’s Achilles heel.