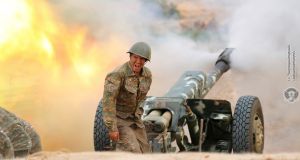 The resumption of fighting in the disputed enclave of Nagorno-Karabakh has already taken a heavy toll. Each side – Armenia and Azerbaijan – disputes the numbers of dead, clearly into the hundreds, just as they dispute who started the recent exchanges, and why, and who is winning. The Azeris insist they have made serious incursions, the Armenians denying as much. There are ominous reports of shelling and casualties beyond the enclave.

The danger is that this intense micro-conflict may yet escalate, drawing regional powers into fullscale war. Nato-member Turkey has already been accused of, and denied, sending fighters from northern Syria to Azerbaijan to support its ally after President Recep Tayyip Erdogan promised full support against Armenia. Russia is a strong supporter of the latter though is selling weapons to both former Soviet satellites. Armenia is a member of the Russian-led Collective Security Treaty Organisation, and could, but has not yet, ask the six-member bloc to help militarily.

Nagorno-Karabakh is one of Europe’s so-called “frozen conflicts” – places, such as Transdniestria in Moldova and Abkhazia in Georgia, that are legacies of the disintegration of the Soviet Union which left national minorities trapped inside hostile states. Nagorno-Karabakh’s Armenian majority, confined within the mountainous region of some 4,400 sq km surrounded by Azeri territory, fought a bloody war in the early 1990s in which up to 30,000 died and a million were displaced, for an independence as the “Republic of Artsakh” that is sustained only by armed force and Armenia. It has failed to win any international recognition. Swathes of Azeri territory around the enclave remain under Armenian control.

A state of “no war, no peace” has prevailed since 1994 with episodic eruptions of violence. A peace process involving Russia, France and the US as co-chairs of the Organisation for Security and Co-operation in Europe’s Minsk Group, has attempted over the years to broker agreement. In truth, though it holds the best hope for a truce, it is as frozen as the conflict itself.