The Irish Times view on Government-Nphet tensions: relations must now be repaired 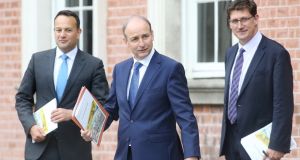 It’s natural that there should be some tension between Government and the National Public Health Emergency Team (Nphet). While their overarching priority – the health and welfare of the public – is one and the same, their roles, remit and responsibilities differ. When judgments based on epidemiological trends or disease modelling analyses are required, Nphet alone has the expertise. Its members, who have given invaluable public service throughout the pandemic, have excelled as public communicators, reassuring an anxious citizenry when required while also encouraging good individual behaviour in the fight against Covid-19.

However, the team’s view is by definition partial: its brief is to dispense public health advice. The task of weighing that advice against other factors, such as economic effects, children’s schooling or poverty levels, then taking the highly consequential decisions that follow, is for Government. It should come as little surprise that on occasion the two entities will see things differently.

And yet the open sniping over the past 48 hours – some of it delivered under cloak of anonymity and some, such as Tánaiste Leo Varadkar’s rebuke of the team on Monday evening, relayed on prime time television – is corrosive and counter-productive. Nphet erred by suddenly recommending an immediate Level 5 lockdown on Sunday evening, having done little to prepare public opinion and apparently without having flagged it with Government.

Varadkar legitimately pointed out the gravity of that step and the multitude of complex questions that flowed from it – all questions that Nphet could not be in a position to answer but that any responsible Government would have to consider before turning the lights off on the economy. To adumbrate the reasons for the Cabinet’s rejection of Nphet’s advice was always going to amount to an implicit criticism of the public health advisory team, but Varadkar seemed to go further, somewhat gratuitously noting that no member of Nphet would be left unemployed as a result of the decision (the same is true of ministers, of course). There was, once again, a notable stylistic contrast with Taoiseach Micheál Martin, who declined to garnish his public remarks with invective.

Martin’s approach was the wiser – not because Varadkar was wrong in the reasons he gave but because this pandemic has a long way to run and constructive engagement between the two key bodies leading the national response – the Cabinet and Nphet – is essential if the country is to confront the crisis effectively. The energy wasted this week in managing the public fallout from the souring of relationships would be better expended in improving lines of communication and decision-making procedures between the two and focusing on the huge public policy challenges that the coming winter will bring.