The Irish Times view on Brexit: One more push

On all key fronts, UK-EU negotiations appear to be amenable to compromise 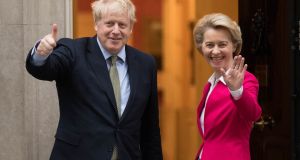 Another Brexit talks deadline extended. Following their weekend phone chat, European Commission president Ursula von der Leyen and British prime minister Boris Johnson professed optimism and gave the process another couple of weeks. Reports from last week’s EU summit suggested, however, many leaders believe a deal is now looking less likely. “They’ve done a deal with Canada – long way away – of a kind that we want,”Johnson complains. “Why shouldn’t they do it with us?” But it is not clear this is really what the UK wants. The EU’s Canada deal eliminates most tariffs on Canadian imports and raises quotas. It is not zero-tariff, zero-quota, and still requires border checks on goods to ensure regulatory compliance.

Yesterday chief negotiator Michel Barnier was in Berlin with Chancellor Angela Merkel exploring possibilities of movement on fisheries, one of the remaining crunch issues. The latter had been more upbeat, telling reporters following the summit that the UK-Norway fish deal earlier this week showed Britain remains on a “constructive path” in negotiations with neighbours. The fisheries argument is now largely about a redistribution of quotas on catches and degrees of access, not the principle of UK sovereignty. Not insuperable. On state aids, the EU has shifted from an insistence on automatic UK replication of its rules but remains frustrated by the latter’s refusal to be specific about its intentions.

Governance also remains problematic given the need to agree a robust dispute resolution system, while the UK threatens to disregard the existing mechanism in the withdrawal agreement. Although adamant the EU would not be the one to walk away from the table over what it sees as bad faith, it has also made clear that no future relationship deal will be possible without repudiation by the UK of the Internal Market Bill provisions. However, there is hope in Brussels the UK will amend the Bill if the trade deal appears likely.

On all key fronts, negotiations appear to be amenable to compromise. Yet it remains unclear whether London is willing to bridge the gap.