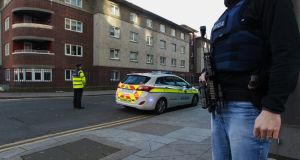 It is reassuring to learn that An Garda Síochána has been attempting to establish how many of its members are armed. It’s less reassuring to learn that the force did not already know. That review has produced some startling results. Some 19 per cent of members of our unarmed police force are permitted to carry guns. Many of those who hold a firearm authorisation are in desk jobs or have no frontline duties but were never asked to hand back the permit when they switched roles.

The reasons for the Garda’s status as an unarmed force, closely bound up with the aftermath of the Civil War, were more pragmatic and less idealistic than many allow

We already know, thanks to a 2018 report of the Garda Inspectorate, that a remarkable 63 per cent of all training at the Garda college in Templemore is devoted to firearms. The Policing Authority has been raising concerns about the general trend for years.

The Irish Times · Conor Gallagher: the origins of our unarmed police force

No modern police force can function without firearms. The threats police face and the proliferation of lethal weapons they are liable to encounter in their work make that clear. It’s also true that the reasons for the Garda’s status as an unarmed force, closely bound up with the aftermath of the Civil War, were more pragmatic and less idealistic than many allow. And yet it’s inarguable that one of the reasons for the success of An Garda Síochána in the State’s formative years, and a factor that enabled it to maintain its standing in the community to this day, has been the absence of the holster from the uniform of the patrol officer.

There are two key obligations on Garda leadership. First, gun permits must be closely monitored and controlled. The force must keep track of numbers, remove authorisations from those who do not need them and set a high bar for permission. The new figures suggest it has been doing none of these things. Second, it must be transparent about just how “unarmed” it is by publishing regular statistics on how many officers are authorised to carry a gun. The Garda routinely blocks queries from TDs and journalists on this, claiming vaguely that such information is “operationally sensitive”. It’s certainly politically sensitive. And only recently did the force begin to publish (minimalist) information on the use of force by its members. Such reflexive secrecy must end.