The Irish Times view on keeping the buses running 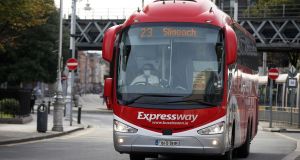 From next month Bus Éireann will suspend indefinitely its service between Dublin and Belfast. Photograph: Sam Boal/RollingNews

From next month Bus Éireann will suspend indefinitely its service between Dublin and Belfast. From some stage next year it will close down services between Dublin and Cork, Limerick and Galway. A service from Galway to Limerick, which was halted in the summer, will not resume.

The immediate impetus for these decisions is the impact of Covid-19 and associated restrictions on travel. The company has told staff it has projections that the routes in question would generate losses of €20 million over the next three years. However, trade unions point to a broader issue. They say the company’s finances have been hit by the policy of recent governments to facilitate the entry of an increased number of private rival bus operators to run high-frequency services, particularly between Dublin and the main cities.

Bus Éireann is pulling out of the main inter-urban routes to concentrate on its city operations in Cork, Limerick and Galway as well as on commuter routes. It says the move will also consolidate its remaining 14 Expressway services around the country. For passengers travelling directly between Dublin and the larger cities, and vice versa, there will be alternative services immediately available.

However, some of the Bus Éireann routes in question also serve towns off the motorways between the large urban areas. It is imperative that these towns do not lose connectivity. Minister for Transport Eamon Ryan said after the Bus Éireann announcement that the National Transport Authority (NTA) would make sure “no town is left behind”. He must be held to his word. A plan for replacement services must be operational before the Bus Éireann services cease running.

Unions have also pointed out that at the height of the pandemic last spring, Bus Éireann services continued to operate at a time when many of its rivals went off the road. The Government and the NTA must ensure that if there are further periods of lockdowns, bus services, which can be crucial for essential workers to get to their places of employment, keep operating.

1 We need to reverse our thinking on lockdown
2 Seán O’Brien: Anger over my parents’ break-up never left me
3 Why Waterford is ‘the best Covid county in Ireland’
4 Two hundred Irish retailers for all your online Christmas shopping
5 Gardaí find ‘fully operational bar’ after visiting suspected shebeen
Real news has value SUBSCRIBE