The Irish Times view on Myrtle Allen: A pioneer in Irish cuisine 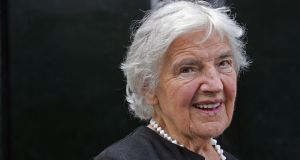 Myrtle Allen, the ‘matriarch of Irish food’, was the first Irish woman to win a Michelin star. Photograph: Eric Luke

Few did more to promote a distinctively Irish cuisine than Myrtle Allen, the chef and hotelier who died this week aged 94. The ‘matriarch of Irish food’ was the first Irish woman to win a Michelin star, an accolade she held for five years, from 1975 to 1980, and was a co-founder of Euro-Toques, an organisation that promotes and protects Europe’s culinary heritage. She was also among the founder members of Ireland’s Blue Book, a marketing organisation that promotes country house hotels, having recognised a market for a style of accommodation somewhere between large, impersonal hotels and small, family-run B&Bs.

A latecomer to the world of professional cooking – she was 40 when she turned the dining room of her family home into a restaurant – she became known for sourcing the best quality local ingredients when in season and treating them very simply.

Don’t open a restaurant if you can’t cook

She wrote her short menus daily, by hand, based on whatever fish were landed at Ballycotton, what meat was available, and what garden produce, most of it grown by her husband Ivan Allen, was at its best that day. Although considered radical at the time, it is an ethos now followed by some of the world’s best restaurants.

In 1981, Myrtle Allen took her unique cooking style to Paris, where she opened La Ferme Irelandaise in the place du Marché Saint-Honoré. It was a showcase for Irish produce and did much to popularise the quality of Irish meat and dairy. Sunday brunch became the hottest reservation ticket of the week, introducing Parisians to the pleasure of eating sausages, eggs, bacon and black and white pudding for lunch.

At home in Ireland, she taught several generations to cook, through her classes, initially run at Ballymaloe House as an off-season income generator, her books and newspaper recipe columns. An honorary life member of the Irish Food Writers’ Guild, she was generous with her knowledge, and direct in her approach: “Don’t open a restaurant if you can’t cook,” she counselled a relative who had asked her advice on a career in catering.

1 Google tells workers to return to country where they are employed
2 Covid-19: One death and 363 further cases confirmed in State
3 ‘Insane’ gathering of hundreds of students in Galway condemned
4 Man unidentified in psychiatric hospital for 30 years may have DNA taken
5 Paul Krugman: Trump’s Debt, His Future and Ours
Real news has value SUBSCRIBE