The Irish Times view on the cervical cancer inquiry: The State must show some urgency 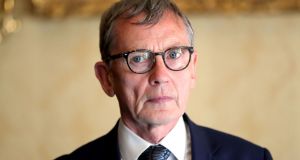 Dr Gabriel Scally, who is leading an inquiry into the CervicalCheck controversy, is frustrated with a number of State organisations, including the Department of Health, the Health Service Executive (HSE) and CervicalCheck, over their slow response to his request for documentation. Photograph: Niall Carson/PA Wire

The scoping inquiry into the CervicalCheck controversy has got off to a poor start. In his initial report, independent chairman Dr Gabriel Scally has indicated he will not be in a position to present his final conclusions at the end of June, as had been envisaged. He is now not expected to do so until the end of the summer.

Scally expressed frustration with a number of State organisations, including the Department of Health, the Health Service Executive (HSE) and CervicalCheck over their slow response to his request for documentation. The inquiry commenced at the beginning of May but its chairman did not receive relevant correspondence until last week.

Any possibility that the information may have been inadvertently delayed is negated by the late delivery of more than 4,000 pieces of correspondence in a nonsearchable format.“It is disappointing and unclear why documents that would originally have been prepared in electronic format (including some very recent documents) are not available to the inquiry in that format, rather than as a scanned version of the printed copy,” Scally noted.

His response is a restrained one in the circumstances. It is simply unconscionable that the work of the inquiry would be frustrated by the failure collectively of State agencies to supply documents in their original searchable format.

Scally is carrying out a preliminary scoping exercise into how US laboratories used by CervicalCheck missed cancers or reported false negatives in smear tests and why the programme failed to tell women about clinical audits of tests after they were diagnosed with cervical cancer, showing them to be incorrect and yielding a different result.

The primary purpose of his work is to frame a series of questions that will inform a statutory inquiry which the Cabinet has committed to as the definitive investigation into the affair.

A significant delay in obtaining medical records has been highlighted also by lawyers representing some of the women involved. This poor flow of information is hampering the speedy progress of individual claims that are before the courts. This too is unacceptable.

The response of Minister for Health Simon Harris has been lame, to say the least. Promising to write to the HSE telling it to give the documents requested by Scally, in the format that he wants, is hardly the vigorous intervention required. Taoiseach Leo Varadkar has warned State organisations not to obstruct Scally’s work. But greater engagement is required by both the Taoiseach and the Minister.

Given that the core issue that gave rise to the CervicalCheck controversy is mismanagement of information flow to patients, it is remarkable that the same problem has beset the scoping inquiry.