Irish Times view on the British government’s admission of illegality 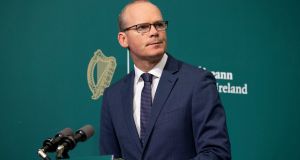 ‘There will be no appeasing of this approach,’ Minister for Foreign Affairs, Simon Coveney told the Dáil. He is right. Photograph: Julien Behal Photography/PA

The Government reacted cautiously on Monday to reports the UK was going to repudiate aspects of the Northern Ireland border protocol. It sought clarification of what was intended. That clarification emerged unambiguously on Tuesday with the astonishing Commons admission by Northern Ireland Secretary Brandon Lewis that “this does break international law,” adding “in a very specific and limited way”. The UK intends, it seems, to breach a legally binding treaty obligation, signed only last year, in a move described by former British prime minister Theresa May as likely to jeopardise the country’s international credibility and ability to conclude future international deals.

London has sought to minimise what is involved but, as the Northern Ireland Justice Minister Naomi Long responded, you can’t be just a little bit pregnant. And the British government’s chief legal adviser, Jonathan Jones, is sufficiently concerned to resign in protest. EU negotiators have warned that bad faith in failing to implement all the Withdrawal Agreement and its Northern Ireland Protocol will jeopardise the future relationship talks which resumed yesterday.

Senior Democrats in the US say repudiation of protection of a soft border on the island of Ireland is likely to see any UK-US trade deal vetoed.

The UK claims the move is necessary to provide a safety net for Northern Ireland should the talks on implementing the Withdrawal Agreement fail. The Protocol and the agreement to which it is attached will stand irrespective of whether any subsequent trade deal is done – their detailed implementation is a matter for the Joint Committee established between the EU and UK which can and will jointly address the sort of specific concerns the UK has raised.

The UK has already bindingly accepted as much, and its suggested unilateral repudiation of that procedure, or its invitation to fail to agree, is as much an attack on the rule of law as the changes it is proposing to make to state aid rules and customs export declaration procedures.

Moreover, the suggestion in London that the protocol’s Article 10 may imply that the whole UK will find itself constrained by EU state aid law even if no trade deal is done is specious. The article clearly limits state aid rules application to “measures which affect that trade between Northern Ireland and the Union”.

Whether the British move is an attempt to derail the Brexit talks, or, as some suggest mystifyingly, evidence of its resolve to get a deal done, “There will be no appeasing of this approach,” Minister for Foreign Affairs, Simon Coveney told the Dáil. He is right. And in that regard Dublin will surely be in lockstep with Brussels and our European allies. Cool heads must prevail but this is no small matter.