A Messi departure: The Irish Times view on another body blow for Barcelona 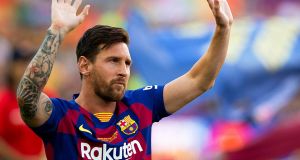 After what Barcelona supporters have endured in the last six weeks, it would be a struggle to persuade them that football is but a trifling matter. First, they saw their team dethroned as league champions by old enemy Real Madrid. Then they were thrashed 8-2 by Bayern Munich in the Champions League. And then, most calamitously, Lionel Messi announced on Tuesday he wants to leave the club he joined two decades ago as a 13-year-old.

The Argentinian is one of the greatest players in the history of the game, arguably only rivalled by Pele and Diego Maradona, and is something of a deity to the club’s supporters. Hence the rage being directed this week at Barcelona president Josep Bartomeu, whom they blame for the disillusioned player’s decision and the decline in the club’s fortunes. If Bartomeu was to announce his departure, Messi could yet reverse his decision, but for now we are heading for what could be one of the biggest legal battles sport has ever seen.

Messi’s contract, due to expire next June , includes a clause that would have allowed him leave for free if he decided to quit at the end of the 2019-20 season. But – and it’s a €700 million but – he would have had to have informed Barcelona of his intention by June 10th this year. Because he left it until August, the club argues that it is entitled to demand a €700 million fee, the release clause in his contract, from whichever club signs him. Messi’s people insist that because the season was disrupted by the Covid-19 pandemic, the June 10th deadline should be extended.

Even if the 33-year-old wins that battle, he won’t come cheap – between salary and bonuses, he earns more than €100 million a year at Barcelona, a figure he would expect a new employer to match. Not many clubs could afford that, his chief suitors thought to be Manchester City, Paris Saint-Germain and Inter Milan – owned partly or wholly by companies in the UAE, Qatar and China. How Messi’s fortunes have changed. When he was a kid, he was told he was too small to make it in professional football. Now he’s the biggest prize in the world game.