The Irish Times view on the Government’s travails: the dangers of incoherence

Notwithstanding two important successes, the July stimulus plan and the reopening of schools, the coalition continues to show a remarkable propensity for self-harm 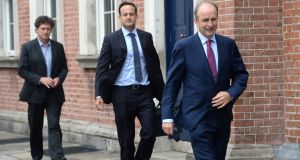 Seldom has a government taken office in more trying circumstances. The three-party coalition assumed power in the middle of a once-in-a-century pandemic that has caused a public health emergency, an economic crisis and severe disruption in sectors such as education and tourism. The social solidarity that marked the early stages of the national lockdown in the spring was bound to fray as people grew weary of their circumscribed lives and began to chafe at the State’s extraordinary restrictions. It was to be expected, then, that any new administration would have a rocky start.

Notwithstanding two important successes, the July stimulus plan and the reopening of schools, the coalition continues to show, more than two months in, a remarkably enduring propensity for self-harm. On the day this week that it in effect offered the public free money – in the form of a stay-and-spend scheme that would enable people to claim up to €125 in tax credits for money spent in restaurants and hotels – the Government found itself haplessly defending a new measure that would require publicans to keep a record of food eaten by their patrons for 28 days. The idea was well-intentioned; it’s an open secret that some pubs are flouting the rule that drink must only be served to those eating a substantial meal, and that’s not fair on business-owners who follow the rules. But the proposed solution and its botched communication, resulting in senior ministers having to deny that a surveillance dragnet would hoover up data on the daily intake of carbohydrates among the citizenry, meant the original intent was lost.

In all three parties, indiscipline is rife. Taoiseach Micheál Martin faces open dissent among some of his backbenchers. Tánaiste Leo Varadkar has slid back into his old habit of casting himself as some kind of commentator on his own government, as he did again this week when he told Fine Gael TDs he wanted to see pubs reopened quickly. The Green Party has had a leadership election while in Government yet still manages to appear the most stable part of this three-legged stool.

The Government’s travails are not a problem merely for the Government itself. They pose a problem for all of us. If the national effort to contain Covid-19 is to succeed, the public must feel it can place its trust in the country’s leaders. People must be persuaded that the extraordinary restrictions and sacrifices they are being asked to accept are clear, rational and fair. By its swift moves to force the resignations of Dara Calleary, Phil Hogan and others after the inexcusable Oireachtas Golf Society dinner in Clifden, the Government showed it recognised the danger of allowing that solidarity to lapse. But the persistent lack of discipline and coherence does not augur well for the long and difficult winter that lies ahead.