Dublin as a Cold War hotspot: The Spy who Came in from the northside

An Irishman’s Diary recalls the shooting of the Spy Who Came in from the Cold, in Dublin 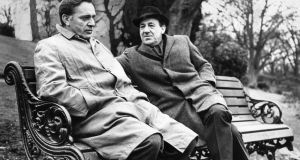 Richard Burton (left) and Michael Hordern at Dublin Zoo during the filming of The Spy Who Came in from the Cold. Photograph: Eddie Kelly / THE IRISH TIMES

The death of John le Carré reminds my occasional correspondent Brendan Cardiff of a time in the 1960s when, driving home through Dublin’s North Inner City, he would pass a large sign at Smithfield that said: “You are now leaving the American Sector”. The same message was displayed in German (“Zie verlassen jetz…”), French (“Vous quittez maintenant…”) and Russian: all warning that he was about to enter East Berlin.

It was of course part of the film set for The Spy Who Came in from the Cold, for which a section of the Berlin Wall had been recreated on Smithfield’s cobbled wastes. One night, like many other locals (and Elizabeth Taylor, who sat in a parked Rolls Royce), Brendan stopped to watch Richard Burton “falling over the wall multiple times” until the director was happy.

Contrary to a popular joke, Dublin 7 was not quite a readymade substitute for post-war Berlin. The film makers had to spend a lot of money doing it up (or down) for the role. And the location was at least partly prompted by the opening a few years before of Ardmore Studios, where interior scenes were shot.

But however accidentally the project ended up in Ireland, it was in one way apt, because of small but consistent strain that runs through the character of the story’s anti-hero, Alec Leamas.

Here is le Carré recalling when Leamas first came to life in his imagination: “I was sitting alone in London airport, minding my own business, when a very rough-edged, kind-of Trevor Howard figure walked in and sat himself at the bar . . . He fished in his pocket, put down a great handful of change in heaven-knows-which currencies and denominations, and then said: ‘A large Scotch’. . . . He drank the Scotch and left.

“I thought I picked up a very slight Irish accent. But there was a deadness in the face and he looked, as we would have said in the spy world in those days, as if he’d had the hell posted out of him. It was the embodiment of somebody, suddenly, that I’d been looking for…I never spoke to him, but he was my guy, Alec Leamas, and I knew he was going to die at the Berlin Wall.”

This hint of ethnicity followed Leamas into the novel. It was “hard to place” him, we learn in Chapter 2, but “his eyes were brown and small; Irish, some said.” Later, when he spends time in jail, his aloofness puzzles everyone except the governor, “who secretly put the whole thing down to the Irish blood he swore he could detect.”

Even the surname had an echo of these parts. When Leamas finds himself working for a librarian, whose passive aggression extends to misspelling his name, he corrects her: “It’s L-E-A, Miss Crail, and only one S.” Presumably, she had spelt it as in the minister for industry and commerce who officially opened Ardmore, Seán Lemass.

That said, when it came to making the film, le Carré was adamant this was a “very British story” and needed an actor to suit. Peter Finch was one possibility, but only if he “was willing to play English rather than Australian”. Burt Lancaster was also threatened, with the Hollywood compromise that he would “play it Canadian”.

Howard was le Carré’s first choice and may have been recommended by a previous roles, in a 1957 film called Interpol or (in the US) Pick-Up Alley. Critics dismissed that as a “feeble thriller”, although Howard’s performance as a gangster was a saving grace. And I mention it mainly because, speaking of rough-edged Irish characters, his was playing one named “Frank McNally”.

Alas, Howard was not considered box-office enough for Leamas. In his 2016 essay collection, Stories From My Life, le Carré described how instead, after the usual B.U.S. (“Big Unexplained Silence”) from the studios, Burton just “emerged”. And despite him being a Celt, at least, the worry now was that “this overpowering Triple Alpha Male talent” could possibly fit into the part of a “washed-up, middle-aged British spy”.

In a chapter entitled, “Richard Burton Needs Me” le Carré recalled how he himself had to come to Dublin to provide the actor with emotional support. Part of the problem was that Burton found it necessary to drink himself into the role.

But the performance was a good one and in a different year might have won the Oscar that always eluded him. Movie fashions decreed otherwise, le Carré wrote: “The film was grim and black-and-white. That wasn’t what we were wearing in 1965.” The Oscar went instead to Lee Marvin for Cat Ballou, a comedy western shot in Technicolor.