Streets ahead: When an Irish street was named after a woman

An Irishman’s Diary: Frances Vandeleur was given Frances Street as a wedding present 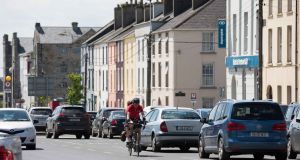 In a feature about Kilrush elsewhere in this newspaper last weekend, it appears, there were references to something called “Francis Street”.

But as a reader from that town, Áine Keating, points out, this was an error both of spelling and gender. The thoroughfare in question is unusual in Ireland for commemorating a woman, and even rarer for using her given name, hence Frances Street, as it is actually spelt, after Frances Vandeleur.

Normally, you’d have to have been Queen Victoria to enjoy such an honour. Not that Ms Vandeleur (née Moore) was short of aristocratic breeding herself. A daughter of the Marquis of Drogheda, she acquired the Dutch surname in 1800 when marrying into a family that owned much of west Clare and was then building Kilrush. She was given Frances Street as a wedding present.

The name is not its only distinction. It is also often said to be the “second-widest” street in Ireland, although that seems to be a very competitive field, because I have seen similar claims made for Strokestown, Co Roscommon, and Templemore, Co Tipperary, if not others.

These are all beaten to first place by Dublin’s O’Connell Street, which used to be wrongly boasted of as Europe’s widest, although less so since the advent of Ryanair. Wideness can be a dubious claim to fame in any case, even for urban architecture. Depending on context, the mere width of a street could emphasise the absence of things – “mind the gap” – as much as their presence. Other members of the Vandeleurs have also had their first names enshrined in the Kilrush streetmap, including a later bride, Grace, who in 1832 became the wife of Colonel Crofton Moore Vandeleur. She at least is unlikely to have her memorial misspelt.

On the downside, the family is now also remembered locally for mass evictions during and after the Famine. Speaking of absences, west Clare is among the places noted in Cecil Woodham-Smith’s The Great Hunger, for the post-Famine emigration even of tenants who could have had viable holdings. Of the area’s emptiness of farm activity circa 1849, she writes, “for ten miles along the high road to Kilrush, no cultivation whatsoever was to be seen”.

And yet decades later, during the Land War, another Vandeleur – the absentee Hector Stewart – was making international headlines for the manner and extent of his evictions.

The New York Times likened the preparations to a small war, as 500 policemen, some mounted, accompanied the ousting of 114 families: “All the houses are barricaded, but the police are provided with battering rams. Parish priests are actively at work counselling submission and it is hoped that there will be no blood shed.”

Had it survived for another generation, Kilrush House, the Vandeleur family seat, might have been among the targets of the IRA incendiary campaign that did for many mansions of the old ascendancy during the 1920s. In the event, it was instead destroyed in 1897 by an accidental blaze. Only the billiard room survived.

Getting back to spelling mistakes, there’s a very common one in the official website for the Vandeleur walled gardens – now restored and open to the public – which suggests the 1897 fire “raised Kilrush House to the ground”.

If there were a single word in English I could ban for causing more confusion than it’s worth, it would be the verb “raze”. It’s an upmarket alternative to “destroy”. But not only is it an encouragement to cliché (because a fire is rarely allowed to just raze a building and leave it at that – no – the building almost always has to be razed “to the ground”), a day never passes in which some writer, editor, or spell-checker somewhere does not decide that the word is spelt “raise”.

Illogicality does not discourage this practice. Archaeologists raise things to the ground all the time. But as to what a fire might raise to the ground, other than the component parts of oil, or natural gas, or any miners unlucky enough to be in the vicinity, I can’t imagine.

Oh well. The Vandeleur gardens are yet another memorial to the family who built Kilrush, although as the website notes, they also serve these days as a testimony to “enduring human spirit”. Having been themselves long derelict, they were gradually brought back to life, starting in 1997. So you might be safe enough suggesting that the gardens have been raised to the ground – the organic parts of them anyway – but I doubt that fire had anything to do with it.