‘Orwell agreed with the dictum: you are what you eat. And he thought poor Paddy had eaten badly, when at all, for too long’ 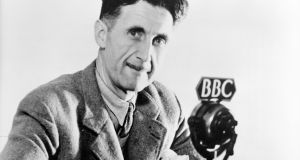 Paddy Jaques was to George Orwell (above) typical of all the vagrants he met during his own, self-imposed period in the gutter. Photograph: Getty Images

Among the many hard-up characters George Orwell meets in his memoir Down and Out in Paris and London are two Irish tramps, only one of whom he gives a name.

The unidentified tramp was a “friendly old man”, writes Orwell, “but he smelt very unpleasant, which was not surprising when one learned how many diseases he suffered from.” There follows a list of the man’s declared ailments, placed in order from the head down, that Samuel Beckett or Flann O’Brien might have been delighted to invent:

“[O]n his crown, which was bald, he had eczema; he was short-sighted and had no glasses; he had chronic bronchitis; he had some undiagnosed pain the back; he had dyspepsia; he had urethritis; he had varicose veins, bunions and flat feet´ . . .”

The other tramp did have a name, or nickname – Paddy Jaques – and by added contrast was “a melancholy, pale man, who seemed clean and decent”. What he lacked, apart from money, was spirit, which Orwell deduced had been leeched out of him by poverty.

Once, while walking the streets together hungry, they saw a misdelivered bottle of milk on a doorstep where nobody needed it. Paddy thought out loud how easy it would be to take it, then fought off the temptation, and afterwards remarked piously that he had never yet resorted to stealing, “t’ank God”.

But as Orwell saw it, it was only “funk, bred of hunger, that kept him virtuous. With [. . .] two or three sound meals in his belly, he would have found the courage to steal the milk”.

Elsewhere, he noted that Paddy had a similar attitude to women. They were unattainable to him now except as prostitutes, and he considered himself above those, although Orwell thought his reaction a mixture of “longing and hatred”.

You are what you eat

Indeed, far from being any kind of national stereotype, Paddy Jaques was to Orwell typical of all the vagrants he met during his own, self-imposed period in the gutter (the late 1920s and early 1930s). There were “tens of thousands in England like him”.

Down and Out in Paris and London was published in 1933, and while finally reading it on a recent holiday, I wondered if a young Samuel Beckett had been among those who devoured it when it first appeared. Beckett himself was never down-and-out, although as regular readers of this column may recall, he was at a loose end artistically in the mid 1930s, and desperate enough once to consider becoming a contributor to the Irishman’s Diary, after his mother assured him he could write “at least as well” as whoever did it then.

Besides Waiting for Godot, Beckett’s other breakthrough work was the trilogy Molloy, Malone Dies, and The Unnamable, in which a key character is Jacques Moran, a Franco-Irish detective who travels to the old country to find Molloy but disintegrates, physically and mentally, en route.

Orwell, who had been in awe of James Joyce, did not live to see Beckett join the literary immortals. But, via tramps or otherwise, the author of Down and Out doesn’t seem to have made much impression on Beckett either.

The sole mention of Orwell in either James Knowlson’s or Anthony Cronin’s Beckett biographies is a fleeting one about the baffled reviews for an English production of Endgame in 1957.

Among those, Cronin wrote, the great critic Kenneth Tynan “made the curious error of suggesting that Beckett was, like Joyce, a lapsed Catholic, and that the play echoed the cry attributed by George Orwell to Joyce: ‘Here is life without God. Just look at it’.”

Beckett was never, of course, a lapsed Catholic. He was a lapsed Protestant. But, by the way, speaking of lapses and religion, it seems I had a small one myself in yesterday’s diary, when referring to Father Gutiérrez, whose affair with Camila O’Gorman led to their execution in 1848, as a “Jesuit”. According to the Irish Jesuit Archive, which knows these things, he was not.