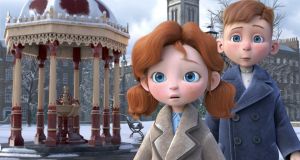 The good people at Brown Bag Films seem to be doing well for themselves. Damien O’Connor appears on my Zoom screen before a large high-ceilinged room with a Christmas tree only slightly smaller than the one in Trafalgar Square. I make the mistake of remarking on this.

“It’s from the film,” he says patiently.

Of course it is. The backdrop is an elegant set in O’Connor’s charming new family animation, Angela’s Christmas Wish. O’Connor and Brown Bag, a hugely successful animation house, look to have become unofficial custodians of the Angela’s Ashes franchise (if we can call it that) in recent years. Angela’s Christmas, the current film’s predecessor, was based on a story from Angela McCourt’s childhood. She, of course, grew to be mother of Frank, author of that massively selling memoir, and Malachy, also a writer and actor.

The new film works from no source material but O’Connorn was in close touch with surviving family members.

“They were involved. Ellen McCourt, Frank’s widow, was an executive producer,” he explains. “And Malachy narrated the first film. I decided we didn’t need a narrator here because we had established the world. So it was just a question of meeting him and telling him the story. It’s his mum. So I wanted him to say: ‘You’re in the right ballpark.’ He read it and he came back with great textual layers.”

Set in Limerick in the early years of the first World War, the picture sees young Angela plotting to get her father back from Australia for a seasonal boost. Available now on Netflix before an RTÉ premiere on Christmas Day, Angela’s Christmas Wish surges with charming jokes, some sound physical comedy and particularly impressive recreations of Limerick. I recognised Pery Square, the Crescent and People’s Park. They were then as they are now.

“Limerick is a beautiful city,” he says. “You can’t ask for more. It was almost like making a live-action film. You can go and scout locations. In the first film there were all these locations I didn’t use because we didn’t have time. These things are always worth celebrating.”

“He was perfect for the role,” Damien says. “I always imagined he would have travelled a lot.”

Students of Limerick celebrity grudge-matches will remember that Richard Harris was no fan of Angela’s Ashes or of Frank McCourt. At the height of the book’s success, the actor vented volubly about the author, whom he had known in Limerick and New York, across a host of outlets. “Limerick, my birthplace, deserves better than this,” he said of the memoir. “He’s a f**king chancer,” Harris told the Irish Independent. Elsewhere, the phrase “galaxy of spite” cropped up alongside more colourful language which would be irresponsible to disinter. Now Richard’s son is part of the expanded McCourt universe. Did this come up at all?

“It didn’t with Jared,” Damien says. “I am obviously aware of it because you Google these things. I know Malachy and Richard were close. I read the. . . controversial, shall we say, interview with Richard Harris where he went into this. It was news to me. I don’t think it’s a big point among any of the family. But I can’t speak much more than that. No, it never really came up.”

Like so many people in the animation business, O’Connor took a meandering route to his profession. There were, decades ago, no signs pointing towards the imminent arrival of a new industry. Brown Bag Films, twice Oscar nominated, and Cartoon Saloon, creators of the current, lauded Wolfwalkers, are among the most respected animation houses in the world. But no pre-millennial career adviser could have seen that coming. Still, he was keen on the medium. He studied 2-D animation at college but couldn’t find work after graduation. That two-dimensional style was giving way to the computer-generated (CG) revolution. Somehow or other, O’Connor found himself making a documentary in Angola.

“That’s what I did. I learned how to cut a documentary down. Then I ended up working in horse racing for live broadcast. Two-D animation had kind of gone then. So I thought: ‘That ship has gone; my life is now horses running in circles.’ I was lucky. Brown Bag said: ‘You’re a 2-D editor who also knows editing.’ So I came in to edit the first series of Noddy, millions of years ago. I then took a break and made a film with a film board grant to get to grips with CG.”

Noddy is just one among dozens of series that Brown Bag produce from their hub in Dublin. There is no single answer as to why Ireland has become disproportionately influential in the field of animation. Many note the arrival of Don Bluth’s animation studio to Ireland in the late 1970s. O’Connor also stresses the importance of state investment in film through Screen Ireland (formerly the Irish Film Board).

“I have asked myself this,” he says. “The support network that is there makes it clear that you can do it. That is so rare in animation – to get money outside the studio system. Also, I know this sounds clichéd, but it is the Irish storytelling tradition. Whether we’re writing books, making films or making animation, it just seems to be something that we are good at. Right?”

The whole world – or that part of the whole world with a Netflix account – will get the opportunity to enjoy the Irish storytelling in Angela’s Christmas Wish. With the flick of a switch, the film became available to some 200 million users (or thereabouts). How does that feel?

“It’s a one-word answer,” he says. “It feels brilliant. I started making short films and I was happy if there were 50 people in the room.”

Angela’s Christmas Wish is on Netflix now and screens on RTÉ1 on Christmas Day at 5.15pm.