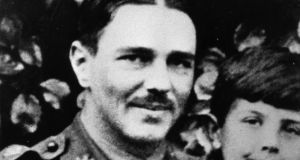 Of all the poets to die in the first World War, the fate of Wilfred Owen may have been the most cruel, if only for his family. He survived until the last week, while 100 years ago today, a defeated Germany turned on itself in the November revolution, and Austria-Hungary agreed a truce with Italy, ending the centuries-old Habsburg Empire.

But then, 100 years ago tomorrow, Owen was “killed while giving a hand with some duckboards” [wooden walkways] near Cambrai, northern France.  The news took exactly a week to travel home to Shrewsbury where, according to his biographer, “the Armistice bells were ringing when the Owens’s front door bell sounded its small chime, heralding the telegram that [they] had dreaded for two years”.

Back in 1914, the then 21-year-old Owen had been in no hurry to fight. He enlisted late the following year and only in mid-1916 reached the front, where he was soon blown into the air by a shell, landing on what remained of a dead comrade. He also spent days trapped in a trench, surrounded by corpses. When shipped home for treatment, he was understandably shell-shocked.

During a lengthy convalescence, he met fellow war poet Siegfried Sassoon, the most influential friend of his short life. Under Sassoon’s guidance, he would write his best verse, which was bitterly critical of war, with none of the patriotic fervour of earlier front-line poets.

If Sassoon had had his way, Owen would never have returned to the trenches. The former once threatened to “stab [him] in the leg” if he tried.  But in the summer of 1918, Owen went back to war without telling him. In early October, he helped storm enemy positions at Joncourt, earning a Military Cross for his courage: something he had craved – paradoxically – as justification for the poetry. He didn’t live to receive the honour.

WB Yeats was notoriously unimpressed by Owen’s poetry, dismissing it as “all blood, dirt, and sucked sugar stick”. Yeats had considered the war “merely the most expensive outbreak of insolence and stupidity the world has ever seen”.  But his objections to Owen and other war poets were based on what he saw as the ancient principles of art.

He argued “passive suffering is not a theme for poetry,” and that “in all the great tragedies, tragedy is a joy to the man who dies”.  He also disliked Owen’s kitschy habit of referring to poets as “bards”, writing “maid” instead of “girl”, and using the adjective “titanic”.

There was also an odour of plain snobbery about some of Yeats’s criticisms.  He considered Owen “unworthy of the Poets Corner of a country newspaper”, adding: “There is every excuse for him but none for those who like him.”

Despite all that, the Shropshire man has been posthumously promoted through the ranks of 20th century poetry.  He certainly seems to have had the last word on the war, and not just because his death came so near the end of it.

Brooke’s The Soldier – “If I should die, think only this of me:/That there’s some corner of a foreign field that is for ever England” – belongs to the innocent early days of the conflict. Owen’s Anthem for Doomed Youth answers it from the bitter distance of 1917, by which time too many such corners had been filled with young men: “. . . Nor any voice of mourning save the choirs, /The shrill, demented choirs of wailing shells; And bugles calling for them from sad shires.”

I wrote here recently about the impending centenary of a “forgotten” Irish writer and journalist, Seumas O’Kelly, an ironic victim of the 1918 Armistice and ensuing celebrations. O’Kelly was at work, editing the Sinn Féin newspaper Nationality, when a mob of Dublin loyalists attacked his Harcourt Street office. Already in poor health, he never recovered from the trauma, and died on November 14th.

Well it turns out that O’Kelly is not nearly as forgotten as I thought.  He has his own loyalists – in Loughrea, where he was born, and elsewhere – and they’ve been busy in advance of the anniversary putting together an impressive programme of events.

A week of commemorations in Dublin starts on November 8th at the Teachers’ Club, and includes a Dublin Shakespeare Society performance of A Weaver’s Grave, at Pearse Street Library on November 15th.

There will also be three exhibitions on O’Kelly’s life and work: at Dublin Writers’ Museum, the Central Catholic Library, and St Patrick’s College, Drumcondra.