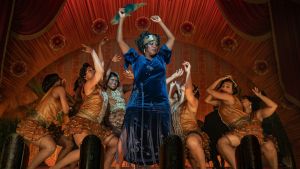 Ma Rainey’s Black Bottom is a 1982 play – one of the 10-play Pittsburgh Cycle by August Wilson – that chronicles the 20th-century African-American experience. Following on from Denzel Washington’s Fences, it’s the second play from that cycle to be adapted, not entirely convincingly, for the screen.

Historically, Rainey was the “mother of the blues”, a big, brassy, gold-toothed, openly bisexual performer who learned her trade in black minstrelsy and vaudeville before signing a deal with Paramount Records in 1923. The ever reliable Viola Davis brings plenty of outrageous heft – quite literally when one factors in her weighty buxom bodysuit – to Ma, who, as the play opens, is late for a recording session of the song that gives the film its title.

Her eventual arrival – and surrounding kerfuffle – does not make the recording any easier. There are musical differences with the egotistical trumpeter Levee, magnetically realised by the late Chadwick Boseman, in a final performance that recalls his dazzling depiction of James Brown in Get On Up.

There are clashes with the white producers of whom Ma makes various demands. “I don’t stand for no shit,” she says. “They going to treat me the way I want to be treated no matter how much it hurt ’em.” Ma, as good as her word, insists on a Coke and that her nephew (Dusan Brown) will speak on the new record, despite his stutter.

There is banter and friction of all kinds between the band members as they debate life, art and race. As with the troubled, not especially sympathetic protagonist of Fences, Boseman’s Levee is a difficult, swaggering, provocative presence, who moves from the recounting of harrowing childhood memories to senseless acts of aggression.

These scuffles are beautifully lit by Tobias A. Schliesser’s cinematography but theatre veteran George C Wolfe is mostly happy to film the play, rather than expand and dilute the material into a larger space. When you have an ensemble as electrifying as this one speaking August Wilson’s words, that’s probably for the best.