Review: Costner keeps it earthy but the film is owned by the warring female characters 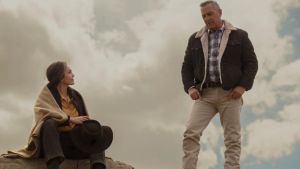 Diane Lane and Kevin Costner in Let Him Go.

Pitched somewhere between the Coen Brothers’ No Country for Old Men and the hicksploitation story-within-the-story found in Tom Ford’s Nocturnal Animals, this gripping neo-western thriller contains all that’s good and bad about death in American movies, a cinema where death and grieving can always be remedied by more death and violence.

A year after James is killed in a freak equestrian accident, Lorna remarries the prim-looking Donnie (Will Brittain).

Donnie, however, isn’t as wholesome as he first appears. Not long after Margaret witnesses him hit her grandson and Lorna on the street, the family disappears, leaving Margaret and George to embark on a desperate search through North Dakota. There, they find the cult-like Weboy family, headed up by brassy matriarch Blanche (Leslie Manville, in the most terrifying turn of her career), a woman whose southern hospitality makes one pine for the relatively civilised embrace of Leatherface’s clan in The Texas Chain Saw Massacre.

It’s the kind of role that Costner, a movie cowboy born at the wrong time in movie history, excels at. But the film is owned by the warring female characters. Margaret is as cantankerous as she is admirable, and Blanche’s pork-chop dinner is about as much fun for the table guests as it is for the unfortunate pig.