Fr Joseph Foy was as much feared for his curses as he was sought for his blessings, which could assure favoured families they would never want for anything 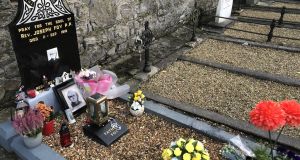 In the grounds of St Muredach’s Cathedral, Ballina, there is a grave that bears certain similarities with the rock-star Jim Morrison’s, in Paris.

This one too is strewn with tributes, not all religious. And it looks even more unusual here because the surrounding burial plot is reserved for members of the priesthood, of whom the man in the grave was one, albeit suspended from practice for the last 20 years of his life.

Fr Joseph Foy was by all accounts a highly intelligent individual, an opinion supported by a photograph on the headstone, in which his eyes are what can be described only as piercing.

But like many priests in his time, he had a severe weakness for whiskey.

This was an occupational hazard, especially in the part of Co Mayo to which he was posted in the 1870s – Erris – where home-made whiskey was plentiful and central to hospitality.

His resultant difficulties are detailed in a 2013 book, Trouble and Strife, by Brendan Hoban, himself a priest who has written a series of histories on the Killala diocese.

As early as 1876, when he was only 35, Fr Foy was “off the mission” (ie suspended from public duties) for several years.   He was reinstated in 1883 and still sufficiently well-behaved to be appointed parish priest of Aughoose a few years later. But in 1890, he blotted his copy-book again, and the suspension became permanent. Although the two things were not explicitly linked, as Hoban says, his 1890 silencing cannot have been unrelated to a sensational court hearing that year, in which he was the plaintiff in an assault case against four men.

There had been drink involved – a lot. In a deposition to Belmullet Petty Sessions, Fr Foy said that he had been ill in bed on the night in question, when the accused, along with others who had assisted at the calving of a cow, came into the house for drinks.

Fr Foy claimed to have been hit on the head with an iron object, and the whole house was soon under fire from fusillades of stones, which continued for up to an hour. His housekeeper was injured, windows and doors broken, and a fanlight smashed. Damage was put at between £10 and £15, a serious sum in 1890.

As Hoban explains, Fr Foy’s subsequent censure did not amount to “defrocking”.  He could still be a priest in private, just not celebrate Mass, hear confessions, or carry on any other public duties. But for many locals, his official disgrace was the prelude to the most glorious phase of his career.

It was widely believed in rural parts then that the powers latent in a priest could achieve full expression only when he was silenced. There may also have been an element, Hoban suggests, of people rebelling against the institutional church through devotion to one of its misfits. In any case, Fr Foy now quickly gathered a reputation as a man who could change lives, for good and bad.

This may or may not have started with him placing a curse on his attackers, but in later years he was as feared for his maledictions as he was sought for his blessings, which could assure favoured families that they would never want for anything. Although it made him an embarrassment to the church, it didn’t discourage the growing cult. Nor did his death, 100 years ago, in September 1918, when he was a patient in St John of God’s, Stillorgan.

Even so, Fr Foy’s followers have seen fit to replace his metal cross, standard on the priests’ graves, with a more elaborate headstone. For that and its other decorations, his grave is in stark contrast to the unadorned ones alongside. Troubled souls in Mayo and beyond still pay visits to Fr Foy, day and night. I’m told it’s not unusual to see someone standing by his grave at four in the morning.