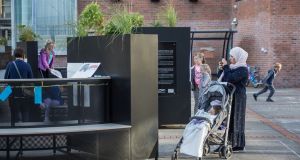 All too often, what prevents good things happening is people not knowing where to start. Lockdowns have shone a light on the resources, or lack of them, in our own localities. Walking within your two or five kilometre areas, are there decent footpaths? Do the roads go anywhere – except to car parks? Where can you stop for a sit and a think?

At the same time, working from home has made local champions and activists of many, who previously may have spent their ire on the congested rat runs of their daily commute, or, ironically, the paucity of parking spaces in town. So where do you start with trying to make your village, town or city a more liveable space?

Reimagine may show the way.

Recently launched by the Irish Architecture Foundation (IAF), Reimagine is a website that includes a series of case studies, a set of toolkits, and a panel of experts, all centred on enabling communities and groups to make the most of, or make better the world around them. It is a different way of looking at architecture, in that it’s more about ideas than buildings, more about conversations than elegant plans and slick foam board models. This is all in a day’s work for the foundation, whose brief is to get away from shop talk of cantilevers and articulations (although sometimes they too succumb), and bring ways of shaping the spaces we inhabit into the world of wider conversations.

Language is a besetting problem with opening up the full possibilities of architecture, and of architects within in our communities. While all professions need their jargons and shorthands, somehow architecture is often presented in word clusters that most resemble the incredibly complex engineering its proponents are also good at.

The Reimagine website opens by letting you know that “this is a central portal for placemaking that harnesses the agency of communities across Ireland to amplify their potential in a way that can transform their physical, social and psychological well being.” But don’t let that put you off. It really is an access point for information to make the most of everyone’s talents and ideas.

In her introduction to the IAF publication launching Reimagine, Tania Banotti, of Creative Ireland, who support the project, pinpoints the core question: “how do we meaningfully listen to, involve and collaborate with those most connected to design projects?” In turn, IAF Director Nathalie Weadick describes “the three ‘P’s: Public, Planners and Professionals,” and says their role is to “act as an independent, honest and hopefully creative broker, to bring them together and help groups achieve what they want to achieve.”

One of the ways we so frequently go wrong is that we think of architecture in terms of buildings alone. This not only misses the point, it also causes no end of problems. Weadick quotes Danish architect Jan Gehl, who recently spoke at the RIAI Conference: “first life, then spaces, then buildings – the other way around never works…” In Letterkenny, the architecture firm of Pasparakis Friel (pasparakisfriel.com) won a competition to make the walkway that links An Grianán Theatre, The Regional Cultural Centre and the Donegal County Museum, a little nicer.

“We were uncomfortable with the brief,” says Ronan Friel, despite the win. “It frustrated us. Past errors, poor planning decisions, and then more public money thrown at it – joined up thinking wasn’t happening. The existing walkway is less than satisfactory,” he continues. “It didn’t sit comfortably.”

Pointing out that at half a kilometre long, with four road crossings and no footpath for some of it, the walkway could never be ideal, no matter how much design-window-dressing it might get, Friel and partner Sosie Pasparakis suggested the longer-term solution of an entirely new route. The suggestion fell on fertile ground. “We have a fantastic regeneration team in Donegal County Council, and society is becoming more demanding too. In the past, Irish towns and villages were designed around roads and cars; pedestrians dealt with the spaces that were left over.”

Meetings and consultations became virtual, as Covid hit, but there were still surprises and highlights. “There were two sisters who had us in stitches, they wanted huge bunny rabbits, Jeff Koons style, but they are also things that could be transformative. It’s about how you begin to develop a space that you’re happy to stop in, to dwell in.” In the end, the architects made a trail along the existing walkway, with graphic designer Lisa Gildea, while beginning planning and negotiations for an alternative route.

Friel agrees that Covid has changed the game for so many Irish rural towns, previously experiencing a long decline. “You don’t have to live urban. Sosie and I lived in London for 15 years. We decided to jump ship. There are opportunities in rural Ireland, and like-minded people. Change is afoot.”

In Loughrea, Co Galway, The Walks runs parallel to the main street. Laid out in the 1790s, the pedestrian route has National Monument Status. The architecture collective, BothAnd Group (bothandgroup.ie) won the IAF competition to create a temporary project that would ignite community interest, and explore how The Walks could be better connected to the town. BothAnd are Jarek Adamczuk, Alice Clarke, Kate Rush and Andrew Ó’Murchú, who met while studying at TU Dublin. Having connected through reading, writing and talking about ideas, the group came together in 2019. “We were fascinated by [Danish-Icelandic artist] Olafur Eliasson, how he talks about making work that’s not passively consumed, but actively produced by its audiences, and we were wondering how to do this,” Ó’Murchú says.

The Walks, with its natural diversity, made the group think of Ireland’s grass monoculture. “The Irish landscape is 50 per cent grass monocultures because of agricultural practices,” continues Ó’Murchú. “This squeezes biodiversity into thin ribbons of hedgerows and trees, and they’re getting narrower.” Building a temporary structure that created a grass passage, ending with a mirror, BothAnd wanted people to, literally, reflect on their environment.

A problem, agrees Ó’Murchú, is that all that green grass is highly attractive. “We wanted to produce something that had a message, but in order for it to be appealing, people had to want to go and see it – so it’s also mirroring the issue. We were trying to push beyond the visual consumption of the landscape.”

Touching on the complexities of engagement, of tackling preconceptions (in oneself as well as in others), Ó’Murchú wants to escape the often narrow frame of reference in which architecture finds itself in Ireland. “It’s why we’re interested in working with people who aren’t architects,” he says. “To do something that’s useful and productive for everyone.”

In Tallaght, the conversations were around what to do in Chamber Square, which adjoins the Civic Theatre, Tallaght Library and County Hall, and Tallaght Community Arts. “We were aware,” says South Dublin County Council Arts Officer, Orla Scannell, “that the neighbourhood consists of these large apartment blocks, adjacent to a cluster of cultural buildings and the civic square; but we were trying make deeper connections.”

A series of consultations, including plasticine and Lego workshops, virtual reality, games and maps, led to some interesting outcomes: particularly that people didn’t want a permanent structure built in the square, and neither did they want something that would take up the whole space. This gives rise to the obvious conclusion: that many many are jaded to having edifices imposed on them, however well-intentioned.

“People thought about the space, and what it meant to them,” says Scannell. “I was surprised at the range and uses for it. It just hadn’t been visible to us in that way.” Including everything from football and hurling, to twirling and running up and down steps, reading to smoking, chalk drawing and dog walking, training and “climbing the walls”, the research also made clear that people had a lot to say, and were very interested in being heard. In Tallaght, says Scannell, “change has come very fast, and you do have people wondering where they fit in. It’s important they have a space to say that, to reconnect.”

Ultimately, the Tallaght Reimagine project, Melt the Walls, led to a temporary pavilion by OBFA architects (obfa.ie) in September 2019. People, says Scannell, “found it a really novel and interesting way to meet, share stories and have new experiences; to be part of it and not feel like they’ve been left behind, or have no involvement… The scale is small,” she concludes. “But the ramifications are big.”

“We can’t provide everything,” adds Weadick as a footnote. “But everything does start with a conversation, and every town or place is different in terms of the people, and their needs. But hopefully we can put some structure or shape on it, because although it is a difficult business, it is really worthwhile.”