American Utopia: David Byrne makes a lot of sense – maybe too much sense

Review: If you like Talking Heads, watch this. If you don’t, don’t 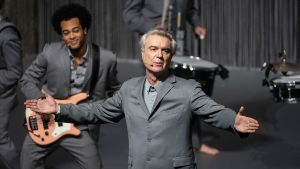 Irish Talking Heads fans hold Stop Making Sense, the band’s groundbreaking 1984 concert movie, in particularly high esteem. During its residency at the Ambassador Cinema in Dublin, the film provoked dancing in the aisles unprecedented for a still-repressed nation.

American Utopia is a very different proposition. Shot with respect by Spike Lee at a performance of David Byrne’s Broadway show – a few songs from the eponymous 2018 album mixed in with many more from the back catalogue – the piece plays out to an audience of visibly well-heeled New Yorkers who do little more than bob politely during even the wildest moments.

Dressed in a grey suit that, unlike a more famous one from the Reagan years, fits his shoulders neatly, Byrne breaks up the songs with brief monologues on life, love and the politics of music. Even the most accommodating viewers will occasionally find themselves trying to flush the dread words “Ted Talk” from their brains.

Those pernickety qualifications aside, American Utopia turns out to be an irresistible Christmas gift for fans of Byrne and Talking Heads (if you don’t care for the music then the movie is unlikely to win you over).

The backing musicians, miked up, instruments slung around necks, come across like a marching band for a hipster American football team. All in the same grey as their leader, they strut and gyrate with a regimental rigour that suits the disciplined funk of Byrne’s music. For the most part Lee shows similar restraint. Only in the later stages does he admit a smidgen of split screen and a brief rotating lens. Elsewhere he cuts from unshowy shot to unshowy shot.

It hardly needs to be said that the shooting predates the pandemic, but the version of Janelle Monáe’s Hell You Talmbout, a song about police violence towards black people, feels uncannily appropriate for 2020. Elsewhere, Byrne, born just to the west of Glasgow, finds time to celebrate the immigrant experience.

The generosity of the politics is echoed in a set list that gives dedicated fans what they want. There is something from Fear of Music. There is a bit from Remain in Light. It all ends with Road to Nowhere and a march through the audience that introduces a little disorder to an otherwise regimented performance.

Mind you, only the cast seem to be dancing in the aisles. You have to mind those $300 brogues.