Newton Emerson: Taoiseach's comments imply he is not really open to considering alternatives 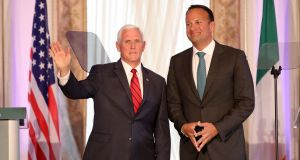 US vice-president Mike Pence with Taoiseach Leo Varadkar after their talks at Famleigh House in the Phoenix Park, Dublin. For Pence to mention Boris Johnson and sincerity in the same sentence, on Tuesday of all days, was beyond parody. Photograph: Paul Faith/Getty Images

Taoiseach Leo Varadkar was reportedly uncomfortable during his press conference with Mike Pence on Tuesday, after the US vice-president urged Ireland and the European Union “to negotiate in good faith with prime minister Johnson and work to reach an agreement that respects the UK’s sovereignty.”

The implication that Brussels and Dublin have been negotiating in bad faith on Brexit is an accusation even British government ministers prefers to have leaked anonymously.

For Pence to mention Boris Johnson and sincerity in the same sentence, on Tuesday of all days, was beyond parody. Johnson was at that moment heading to Westminster to pretend to be negotiating a deal, so that he could trigger an election he had just claimed not to want.

However, Varadkar has brought much of this suspicion on himself. In an interview with the media on Monday, he openly declared what appeared to be a bad faith position on the backstop.

“The backstop is a means to an end,” the Taoiseach said.

“It’s there to ensure that we continue to have frictionless trade North and South: no physical infrastructure, no checks, no controls, no tariffs.”

Another Brexit extension looks increasingly possible, creating space to consider alternative arrangements in the context of the withdrawal agreement

There is a deepening dispute between London and Dublin over whether the commitment to avoid checks and controls applies only at the Border or everywhere on the island of Ireland.

Having no tariffs is also a radically different proposal from having no customs posts.

Closed that possibility down

But this first half of the Taoiseach’s statement at least left open the possibility of other means to the same end. In the second half, he closed that possibility down.

“Of course I’d listen to any proposals the British prime minister has to achieve that by alternative means,” Varadkar continued.

“The difficulty is that anything we’ve seen so far when it comes to alternative arrangements do something very different. They just manage a border. They facilitate tariffs. They facilitate checks. They facilitate controls, but try to do it in a way that is invisible and unobtrusive. That’s better than nothing but it’s not the outcome we want.”

If managing the Border so it is invisible and unobtrusive is still not good enough, the only alternative is for Northern Ireland to remain in the EU customs union, single market and VAT area – in other words, to remain permanently in the backstop.

That is not what was agreed between the EU and Johnson’s predecessor Theresa May.

Their political declaration merely states the backstop should be replaced by “alternative arrangements for ensuring the absence of a hard border.”

The withdrawal agreement states such arrangements must “address the unique circumstances on the island of Ireland, maintain the necessary conditions for continued North-South cooperation, avoid a hard border and protect the 1998 Agreement in all its dimensions.”

Scope was clearly left there for technical and administrative solutions. The withdrawal agreement also says the backstop can be “superseded, in whole or in part, by a subsequent agreement”, meaning Northern Ireland could stay aligned to the single market, for example, with alternative arrangements for everything else.

Varadkar may have strong tactical reasons to stand firm on the backstop and of course he cannot engage in negotiations via media interviews. Ruling out any changes to the withdrawal agreement before the imminent Brexit deadline on October 31st is fair enough.

But the Taoiseach’s remarks also effectively ruled out addressing the backstop during the transition period or replacing it with a future trading arrangement, driving as much of a coach and horses through the withdrawal agreement as Johnson, albeit from the opposite direction.

We get Irish television

To turn around a jibe often levelled at the UK, we get Irish television and newspapers here too. Varadkar’s interview was noted by Westminster journalists and will have been seen by many MPs, as well as by unionists in Northern Ireland.

Varadkar likes to point out the backstop enjoys majority support in the North, according to opinion polls, and is therefore democratically legitimate. That majority only exists because 15 per cent of unionist voters support it.

They and everyone else have been told the backstop is meant to be temporary, so the polls are an invalid crutch for the Taoiseach’s stance.

Unionist support for the backstop has been dropping – a poll last year indicated it was 40 per cent. DUP scaremongering has much to do with this but perceptions of Irish bad faith have played their part, and not just by making the scaremongering plausible.

There is still time before Brexit day to agree the backstop through additions to the political declaration, even if there is an immediate UK general election. Another Brexit extension looks increasingly possible, creating space to consider alternative arrangements in the context of the withdrawal agreement.

Johnson and the DUP have proposed an all-Ireland agrifood zone, which would solve 30 per cent of border issues – a solid start to removing the backstop in part, as the agreement permits.

But how can those discussions take place in good faith when Varadkar apparently wants the backstop to endure forever?

1 Why our love for Leo is withering on the vine
2 No obvious signs of injury on remains of McGinley children
3 The five ‘hidden’ reasons that stopped me losing weight
4 Snow expected as Met Éireann issues status yellow weather alert
5 Dancing with the Stars: Glenda Gilson sinks like Titanic
Real news has value SUBSCRIBE