How frequently does violence have to occur before the Troubles have restarted? 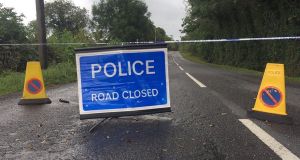 A police road block close to the scene where an explosive device was detonated in Co Fermanagh on Monday. Photograph: PA Wire

The real story of Northern Ireland over the past three years is how stable it has been. The real tragedy is not of a fragile peace being taken for granted but of a truly robust society being built then persistently pushed to the edge.

Since Stormont collapsed there have been four elections, all contested on fraught platforms predicted to hollow out the centre ground.

Instead, Alliance doubled its vote in both elections this year, while Sinn Féin’s vote share declined. Alliance also increased its vote by 9 per cent in the first of those elections, to the Assembly in 2017, while the DUP’s share declined. The Alliance surge is no sudden howl of frustration after years of political crisis. It was the electorate’s first response and has been sustained.

Since the EU referendum, there have been four marching seasons. The first saw a resolution to the only remaining flashpoint parade, in north Belfast, heralding the longest period without major street disorder since the 1950s. Last year, councils and the police were confident enough to begin tackling contentious bonfires, assertively and successfully.

There has been no devolved or direct rule government for 32 months – an unprecedented power vacuum. Budgets have been stretched but otherwise everyday life has continued, without protests or disruption. The political deadlock has been portrayed as a battle over rights, split along traditional party lines and with constitutional implications. But the public has declined to be divided into culture war camps. Polls find unionists and nationalists have the same spread of opinions on social issues.

Brexit has provoked discussions of a Border poll and a united Ireland, against a backdrop of huge uncertainty for the future of the UK. It seems inevitable that Westminster will shove Northern Ireland into some kind of special arrangement.

This might have been expected to dangerously unsettle the unionist population, given the chaos that followed the removal of one union flag from Belfast City Hall just six years ago.

Yet so far the entire population, unionist and nationalist, have kept their heads to a remarkable extent. Perhaps the flag protests were a final lesson in the futility of blocking the road.

Journalists, who spend too much time online, despair at the invective on social media but this has also produced no obvious disorder and that is no minor point. Social media has tended to spark immediate unrest whenever it has arrived in unstable societies. In Northern Ireland, the model has been not so much the Arab Spring as Scottish Twitter.

The understandable mood of foreboding that has grown over the past three years has been countered by a reluctance to encourage self-fulfilling prophecies. But this week there is a perceptible sense the edge is in sight and must be acknowledged to have any hope of avoiding it.

A dissident republican bomb on the Fermanagh border, a loyalist-linked murder in Co Down and an IRA funeral in west Belfast, with shots fired over the coffin, could each be reasoned away in isolation. They could even be downplayed together – there are still fewer such incidents than 10 years ago.

Happening within hours of each other on Monday, however, they created the sense of an accelerating drumbeat.

How frequently does violence have to occur before the Troubles have restarted? It may not be apparent until it is too late. The official start date of the Troubles is 1969 but the UVF committed the first murder and bombings three years earlier. At the time, the only people who did not see these as isolated incidents were those hoping and scheming for more.

Watching the news on Monday, I had a flashback to the weird atmosphere of the Troubles, when television reports of shootings and bombings were the grim teatime end to ordinary days.

We warn young people about the horror of the recent past. It might be better to warn them of the mundanity. They can ruin their lives and their community, maybe take lives, but the rest of us will learn to ignore it. We can keep that up for decades. In the end, their “war” will be as futile as blocking the road.

What most unnerved me on Monday was the reaction of DUP leader Arlene Foster and Sinn Féin MP Michelle Gildernew. They were interviewed in Fermanagh, their constituency, where they had come to stand side by side and condemn the bomb. There is a protocol of responsible behaviour on these occasions and they breached it as badly as I have ever seen, sniping and sneering at each other about the IRA and the British army, just yards from where PSNI officers had narrowly escaped death.

We are encouraged to view the cycles of violence in Irish history as almost naturally occurring disasters, yet individuals cause them and only individuals can stop them.

When we look over the precipice, what we are looking for is leadership. That is what is frighteningly absent today.

1 Six forgotten Irish women who achieved the extraordinary
2 Mother of McGinley siblings arrested on suspicion of murder
3 Mother of McGinley children found dead last week arrested
4 Billie Eilish: Her stance that her body is not public property is still a radical act
5 ‘In Ballyhaunis there were Arab people all around me’
Real news has value SUBSCRIBE