The Irish Times view on Ireland’s creative spaces: the hollowing out of urban life

Creative citizens should be at the top of planning agendas, to counterbalance the commercial interests 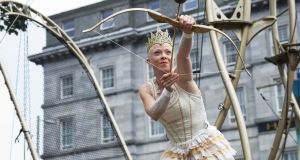 The “Behind the Scenes” acrobat show, which ran in Eyre Square, Galway, during the city’s international arts festival this summer. Photograph: Andrew Downes/ Xposure

"The theatres, the people running club nights, the people running markets, anything that’s independent, under the radar, not necessarily commercial, it’s all being squeezed out.” Dublin Theatre Festival director Willie White’s observation in today’s Irish Times rings true to anyone who has observed the flattening out which has taken place in recent years across the city, as venues and other creative spaces are replaced by offices, hotels and leisure chains.

The consequences are obvious at this time of year, with the most unlikely spots being pressed into action as temporary venues for the Fringe and theatre festivals. Across the other 11 months, the effects may not be so glaringly apparent, but the relentless displacement is alarming.

The city’s authorities seem unwilling or unable to respond. They have permitted pell-mell commercial development in the last remaining parts of the docklands without requiring that any meaningful cultural component be included. Their grandiose plan for a new cultural quarter on Parnell Square has collapsed under the weight of its own unrealistic expectations of philanthropic funding. In truth, what Dublin’s culture needs most is not major capital projects, but a fundamental shift in policy, which puts the creative citizens and audiences at the top of every planning agenda to counterbalance the powerful commercial interests which currently hold sway.

The problem is most pressing in Dublin, but it is not confined to the capital. Yet again this year, Galway Arts Festival’s organisers highlighted the absurdity that the city does not have even one permanent gallery for the visual arts. Such an embarrassment should cause those responsible to hang their heads in shame as they prepare for Galway to become a European Capital of Culture in 2020.

Not all culture and creativity happens at night, but there is a significant overlap with the question of how to ensure a vibrant nightlife in our cities. Belatedly following an example already set in many other countries, Minister for Culture Josepha Madigan has announced plans to establish “pilot night-time culture groups” in Dublin and Cork, comprising representatives of the creative and arts communities, the entertainment and business sectors, the local authorities and the Garda. According to the Minister, the groups will be tasked with “proposing practical locally based initiatives to improve night-time culture in their city as well as identifying changes required at a national level”.

Given the speed with which our urban centres are being reshaped, the Minister would do well to speed up the pilot phase of the plan and move as quickly as possible towards agreeing and implementing practical policies that will have a real effect on the ground. Otherwise she and her Government colleagues risk being remembered as having presided over an irreversible hollowing out of urban life in Ireland.