Newton Emerson: How the UK election plays out in North will be crucial 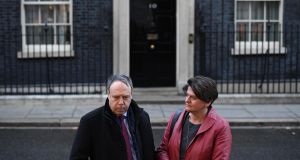 The UK is going to have a general election within months. Prime minister Boris Johnson’s working majority, including the DUP’s 10 MPs, has fallen to one.

This is clearly unsustainable and leaves only the question of timing: will he be forced to call an election as soon as parliament returns next month, after losing the vote of no confidence promised by the Labour Party, or can he cling on until after Brexit day on October 31st?

It takes six weeks to organise a general election and the confidence vote process adds another two, so polling day would be in early November.

Labour’s Brexit policy is for another extension and a renegotiation, so it insists no-deal cannot be allowed to happen automatically, as governments are not meant to take major decisions during election campaigns.

There is also talk of parliament seizing control in the interim, of Johnson proroguing parliament to stop it or of Labour forming a new minority government during the confidence vote process. All must be considered desperate schemes.

It is plausible that MPs could hold another vote against no-deal – the only Brexit position for which there is a Commons majority. Such a vote would instruct the prime minister to request an extension, which would put the EU in the thankless position of considering an extension for a UK government that does not want it.

This would be a particularly awkward moment for Ireland, which would still have hopes that an extension could prevent a no-deal or at least provide more time to manage the Border. Dublin could find itself making that argument against total scepticism across Europe.

Naturally, Johnson’s preferred option is to cling on until Brexit day and call an election in triumph. Westminster tribalism and the complexities of the confidence vote process mean this is also just about plausible. Going to the polls in the weeks before or after Christmas is considered unwise – it has not happened in the UK for a century – so the vote would probably be held in February.

By that point, as far as Dublin is concerned, the Brexit damage would have been done. The UK would be out of the EU and Johnson would most likely be back in No 10.

Whether the election takes place in February or November, how it plays out in the North will be significant. If the election deprives the DUP of the balance of power at Westminster, Johnson will be free to bring in Northern Ireland-specific Brexit arrangements, perhaps restoring or effectively replicating the backstop.

Knocking the DUP off its Westminster perch is not a given. Opinion polls show Johnson returning just short of an outright majority. The electorate is already so polarised on Brexit he may not gain much of a bounce from delivering it.

One-third of Conservative MPs oppose no-deal and could continue to make trouble. Many will be targeted for deselection but even with a solid majority, a new Tory government might have good cause to keep the DUP onside.

Once Brexit has happened, a marginalised DUP and a self-marginalising Sinn Féin will have nowhere to go but back to Stormont

It must be presumed the DUP will lose its kingmaker role, however, as the Commons has to be so finely balanced for such a small party to be essential.

The DUP could be even smaller after an election, as it faces losing two seats to Alliance and has only one potential gain, from independent unionist and anti-Brexiteer Sylvia Hermon. If the DUP drops to eight seats, Northern Ireland will no longer have a majority of pro-leave MPs.

The Alliance surge in local and European elections three months ago, when the party more than doubled its vote, is a lesson the DUP has not learned. Although it knows a general election is coming, the DUP has done nothing to moderate its stance on Brexit or any of the other issues driving Northern Ireland’s voters to the centre.

None of Sinn Féin’s seven seats are at risk to Alliance but Brexit has hampered its appeal to centrist voters, due to its Westminster abstention policy. That will be underscored if its MPs could have proved decisive in confidence and no- deal votes in the coming months.

During the past general election in 2017, Sinn Féin proposed an anti-Brexit pact with all other remainers, except Hermon, who was apparently the wrong sort.

Unlike the pact recently suggested by Fintan O’Toole, in which Sinn Féin would stand down for non-abstentionists, Sinn Féin wanted everyone else to stand down so it could abstain on their behalf. It will almost certainly propose the same at the next election, making itself look even more cynical and ridiculous.

Once Brexit has happened, a marginalised DUP and a self-marginalising Sinn Féin will have nowhere to go but back to Stormont. That would greatly assist London and Dublin in working together to repair some of the damage of the past three years.