Among those best positioned to rescue him are international oligarchs. That includes Putin, but others as well. 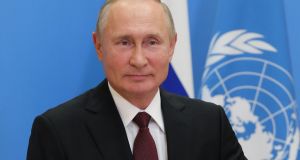 Trump’s obsequiousness toward the Russian strongman has been one of the enduring enigmas of his presidency.Photo: Russian President Vladimir Putin address the 75th session of the United Nations General Assembly, via teleconference call, in Moscow on September 22, 2020. (Photo by Mikhail Klimentyev / Sputnik / AFP) (Photo by MIKHAIL KLIMENTYEV/Sputnik/AFP via Getty Images)

In his new book “Rage,” Bob Woodward reports that Dan Coats, Donald Trump’s first director of national intelligence, was never able to shake his suspicions that Trump is in the pocket of President Vladimir Putin of Russia.

Coats is obviously not alone — Trump’s obsequiousness toward the Russian strongman has been one of the enduring enigmas of his presidency. Even Trump’s natural affinity for autocrats doesn’t explain why Putin is one of the few men on Earth whom the president of the United States treats as his better.

The New York Times’ blockbuster exposé of Trump’s taxes does not directly solve this mystery. The journalists Russ Buettner, Susanne Craig and Mike McIntire make clear that Trump’s taxes reveal no previously unreported financial link to Russia; the documents mostly “lack the specificity” required to do so. But the revelation of the gargantuan debt closing in on Trump offers one plausible motive for why the president constantly sucks up to Putin, even when doing so seems politically self-defeating.

Michael Cohen, Trump’s former fixer, has said that Trump thinks Putin is the richest man in the world. And the American president, The Times’ reporting suggests, may need a bailout.

Trump, reported The Times, “is personally responsible for loans and other debts totaling $421 million, with most of it coming due within four years.” He is also fighting the IRS over a tax audit that has the potential to cost him more than $100 million. Since 2014, Trump has unloaded almost all his stocks. As of June, he had “as little as $873,000 in securities left to sell.” He’s a man, said The Times, “in a tightening financial vise.”

That’s the context in which Trump spent the 2016 presidential campaign trying to make a deal to build a Trump Tower in Moscow. According to a Forbes investigation, he stood to earn about $35 million upfront. The Times article reveals how badly Trump needed the money, and likely needs it still.

Well before 2016, Trump had experienced the beneficence of Russian oligarchs. In 2004, he paid $41.35 million for a home in Florida, then tried to flip it. It sat on the market for years, but in 2008, a Russian potash magnate named Dmitry Rybolovlev bought the house for around $100 million. (As Politico reported, it was later appraised for much less.) Rybolovlev reportedly never lived in the mansion and visited only once. He eventually tore it down and sold the property in parcels. According to Cohen’s book “Disloyal,” Trump was convinced that the real buyer was Putin.

The Times article on Trump’s taxes reveals another instance where Trump found doing business with Russian oligarchs uncommonly profitable. In both 2012 and 2014, The Times reported, Trump lost money on the Miss Universe pageant, which he co-owned. But the 2013 pageant, held in Russia, was Trump’s most profitable Miss Universe event. He earned $2.3 million, even as Trump’s Russian partner, Aras Agalarov, lost money. (Agalarov’s son, of course, later brokered the meeting between Trump campaign officials and a Kremlin-linked lawyer peddling dirt on Hillary Clinton.)

Coats, wrote Woodward, thought Putin “had something” on Trump. Despite efforts by Trump’s allies to write off Russiagate, Coats was clearly correct about that. If nothing else, Putin would have known about Trump’s Moscow real estate maneuvering years before the American people did.

But you don’t need blackmail to explain Trump’s fealty to the Russian president. Avarice will suffice.

Trump’s financial condition, wrote The Times, “lends some credence to the notion that his long-shot campaign was at least in part a gambit to reanimate the marketability of his name.” Throughout the campaign, he tried to ingratiate himself with Putin. But then, catching the tiger by the tail, he won.

He’s used his office to extract all that he can. “His properties have become bazaars for collecting money directly from lobbyists, foreign officials and others seeking face time, access or favor,” wrote The Times. As president, he’s garnered millions from licensing deals in foreign countries, including some with authoritarian leaders: “$3 million from the Philippines, $2.3 million from India and $1 million from Turkey.”

But he appears to need more. Trump’s brand, perhaps his most lucrative asset, is worthless in much of the country. His family’s plans for two new hotel chains, Scion and American Idea, were scrapped last year. Despite hosting festivals of graft, his Washington hotel lost $55.5 million through 2018. The Times reports that the coronavirus pandemic is hitting Trump’s businesses hard. (That may be one reason he’s extra desperate to lift public health restrictions.)

Among those best positioned to rescue him are international oligarchs. That includes Putin, but others as well. Trump, for example, helped Saudi Crown Prince Mohammed bin Salman evade consequences for the killing of Washington Post columnist Jamal Khashoggi, boasting to Woodward, “I was able to get Congress to leave him alone.”

Perhaps the president simply feels a kinship with rich villains. But if he’s truly facing ruin, Trump needs them at least as much as they need him.

1 Three relatives dead after apparent murder-suicide in Kanturk, Co Cork
2 Don McLean: ‘My ex-wife is the worst person I ever knew’
3 How much state pension will I get next year?
4 Woman stranded in Ireland due to pandemic has ‘miracle baby’
5 Almost 20% of staff at Dublin hospital have antibody evidence of Covid-19 infection
Real news has value SUBSCRIBE