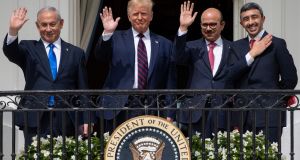 Israeli prime minister Binyamin Netanyahu, US president Donald Trump, Bahrain foreign minister Abdullatif al-Zayani and UAE foreign minister Abdullah bin Zayed Al-Nahyan wave from the Truman Balcony at the White House after they participated in the signing of the Abraham Accords where the countries of Bahrain and the United Arab Emirates recognise Israel, in Washington on Tuesday. Photograph: Saul Loeb/ AFP via Getty Images

It is difficult to see more than a US presidential election campaign stunt in Tuesday’s much-hyped White House signing of recognition deals between the United Arab Emirates and Bahrain and Israel.

Both Gulf states, the third and fourth Arab states after Egypt and Jordan to recognise Israel diplomatically, share Israeli prime minister Binyamin Netanyahu’s gratitude to Trump and hope to see him re-elected. That brings a willingness to see the diplomatic warming of mutual relations presented as a major step towards peace in the Middle East. Grist to the Trump campaign message that he is an international statesman – his Facebook ads were already declaring last week that he had “achieved PEACE in the MIDDLE EAST”.

Trump insists that “we’re very far down the road with about ... five additional countries” – officials suggest Oman, Sudan and Morocco may be next – but the absence of key regional player Saudi Arabia from Washington was most telling. Despite Trump’s hints to the contrary, he has been told personally by King Salman that Saudi remains committed to the 2002 joint Arab peace plan requiring full Israeli withdrawal from territory occupied in 1967 to get normalisation with the Arab world.

Palestinians remain deeply disappointed at the fracturing of Arab unity. Israel has successfully played on fears among states under Sunni leadership of Iran’s regional role in backing Shia militias from Yemen to Lebanon and these currently trump traditional solidarity with the Palestinians’ two-state aspirations.

Although Israel has paid a welcome price for the recognition deals in having to suspend, for now, its West Bank annexation plans, Netanyahu will have been relieved to find an excuse to put such inflammatory provocations on hold. Some Israelis ask hopefully if their country could at last be gaining acceptance in the region as a legitimate member of the neighbourhood. But their country’s leadership knows only too well that Tuesday represented far less than Trump would have us believe.