Pat Leahy: What Ireland can learn from the Germans

Germany, of course, is not perfect but we can learn a lot from its people 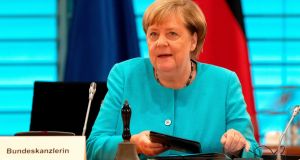 About a million years ago, or at least in the mid-1990s, I followed the then well-worn trail for Irish students and spent a few summers working in Germany. Thousands of us staffed the assembly lines in car plants, envelope factories, furniture warehouses, and so on. We practised our bog-German (though more often the Germans practised their English on us), sublet student accommodation and overcrowded it dangerously, drank oceans of excellent beer, put old five pence pieces into the payphones (they were the same size as Deutschemarks) once a week to tell our parents we were still alive, saved pots of money for college and generally took advantage of the remarkable tolerance of Germans by breaking many of the rules they unconsciously observed. We bunked on public transport. We didn’t recycle (except for the beer bottles). We slept at work. We thought they were nice but dim. God knows what they thought of us, but they welcomed us back year after year.

Despite Germany’s economic power, it was clear that parts of the country were struggling. It was a few years after the reunification of Germany and the costs of that process led to a long and protracted recession. The workplace reforms were in the future. To us, everyone seemed overpaid (including and perhaps most especially ourselves) and overholidayed.

How many holidays do you get a year, I asked one of my Balkan co-workers one day in my pidgin German. Sechs wochen urlaub, he replied, sechs wochen krank. Six weeks holidays, six weeks sick. This can’t last, I thought.

But it did, really. It changed, but it lasted. Germany reformed its economy, but it maintained the essential social solidarity and the social market model that underpinned its earlier success. Not only that, but the country – under a remarkable leader – has assumed a kind of political and moral leadership in the West best illustrated when Angela Merkel looked at a million refugees swarming into Europe in 2015 and said: Wir shaffen das – We can handle it.

A new book by veteran British journalist and long time Germany-watcher John Kampfner, Why the Germans Do it Better: Notes from a Grown-Up Country, examines Germany’s success, and interrogates the factors that contribute to it. Kampfner has identified six characteristics that have enabled Germany to meet the challenges thrown at it and maintain its economic and social equilibrium: good governance; high skills; solid public finances; regional strengths; social solidarity; and what he says is a “new found characteristic”: compassion.

The contrast that Kampfner most frequently draws is with his native country, which does not fare well by it. By comparison, the UK is characterised, he says, by “hubris, monolingual mediocrity, a moribund political system, delusions of grandeur, infantile and improvised politics, and an absence of rules.” Yikes. But how does Ireland fare?

Readers will have their own view on how Ireland does by reference to Kampfner’s six Germanic virtues. I’d say it’s a bit of a mixed bag. We’re good at some parts of governance – tax collection, for example – and hopeless at others, such as devolving powers to local government. We are well educated academically, but have a glaring lack of technical apprenticeships, one of Germany’s greatest economic strengths. Our public finances are solid, except when they are not, and I have a growing suspicion that our political culture does not reward a commitment to fiscal prudence. We are hopelessly centralised. Social solidarity is strong, if under pressure. And we are, I think, pretty compassionate.

But what we can learn most from Germany’s success is the virtue of Langsam aber sicher – slow but sure. The strength of societies, economies and polities is rarely built quickly – but instead by the gradual accretion of good policies, good government, wise but sometimes contemporarily unpopular decisions, private wealth and social capital. Germany has a competitive politics for sure; but most of the competition is between people and parties that subscribe to these ideas. More importantly, perhaps, they are shared by the people who elect the politicians.

Their politics is less prone to the passing excitements which command too much of our attention in Ireland, and seem to be the only thing that matter in the UK. Despite Merkel’s importance, the system is more important than the leader. Not surprisingly, the Germans are resistant to the idea of politics as a tool of the Great Man, or Woman.

These are not abstract considerations. Germany’s government, politics and social services have enabled it to manage the pandemic more effectively than any other western country. Its health system was immeasurably better equipped to handle the disease than the ramshackle Irish system. But that was not an accident: it was the product of a system built up over years, funded by 15 per cent of every workers’ salary – half paid by the worker, half by the employer. Spain and France have had more than 30,000 deaths, the UK more than 40,000. Germany, with a bigger population than either, has endured less than 10,000. Germany’s good government is not just making its citizens wealthier; it is saving their lives.

Germany, of course, is not perfect. It has often condemned Putin’s Russia – most recently for the poisoning of Alexei Navalny – but the country relies heavily on Russian fossil fuels. It has benefitted from the euro while charging others a heavy price for its strength. Its business and banking scandals are every bit as gaudy as anywhere else and demonstrate the dark underbelly of its corporate culture. The far right is on the march. And nobody seems to know what will happen when the towering Merkel departs.

A quarter of a century ago, I often got the sense that the Germans rather envied how much fun we had in those carefree summers. In these more serious times, it is the Irish who can learn from the Germans.