World News Day: Ever wonder how the news gets out? 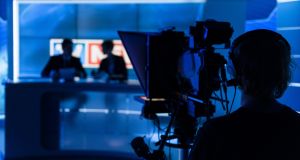 ‘Camera operators, reporters and photographers may choose to go into dangerous situations to tell their communities what is going on.’ File photograph: Getty

On September 28th we celebrate the third annual World News Day. Across six continents, more than 100 newsrooms are marking the day.

What does journalism mean to you in 2020? We have asked the newsrooms to give some space to you, our audience, to tell us.

Perhaps you have never met a journalist but you worry about their safety amid the social unrest in so many parts of the world. Most likely, you don’t think twice about how the news gets out.

When The Canadian Journalism Foundation launched worldnewsday.orgthree years ago, it was clear that amid full-scale assaults on the integrity of journalism, there were two important groups of voices who best tell the story of journalism – the journalists, and more importantly, our audiences.

Since the industry’s earliest days, most of us have been satisfied as reporters, photographers and editors to be in the background. We were trained from day one that journalists are not the story. But in recent years, powerful forces have pushed our profession into the headlines.

Routine verbal attacks have grown into targeted physical attacks against journalists going about their daily jobs. Camera operators, reporters and photographers may choose to go into dangerous situations, even riots, to tell their communities what is going on, but it is only in the last years that wearing the PRESS identifier turns the journalist into a target.

World News Day is not intended as an industry celebration. It is instead a day to pause and give the people we have turned into stories a platform to explain how journalism made a difference in their lives.

On the evening of September 28th, we have a two-hour show presented by CNN’s Reliable Sources host Brian Stelter. We will revisit some of the most important moments of this incredible year for news.

Among the guests is Mary Cain, at one point an indoor world record holder and the World Junior track champion in the 3,000m. She explains how journalism helped her and others to break free from a toxic training environment where her body weight target was unreasonably low.

You will hear from John Sanders, a protester who spoke to the press after he was partially blinded by police while demonstrating over the death of George Floyd. And 16-year-old Autumn Peltier, whose goal may be simple but remains still out of reach – clean water for all. These are the voices that journalism can amplify and connect to policymakers as part of wider conversations. Journalism is about improving the world and ensuring we talk about the need for better climate coverage, social justice and information that can save lives.

Dr Anthony Fauci of the Center for Disease Control in the US who talks often about the importance of following facts and scientific evidence will join us too.

And Maria Ressa, the tenacious co-founder and executive editor of the Filipino news site, Rappler, will convey her experience as she faces years of possible imprisonment. Her crime in Manila? Journalism.

Beyond the show, there is an opportunity for audiences across Africa, Asia, Europe, North and South America and Oceania to reflect on the importance of journalism, and perhaps above all simply the desire to be able to access accurate information.

Faith in journalism is only earned through focused consistent work done by individuals who live in the community. Wherever you are, they need your support.

And for those communities who now live in a news desert, where there is no longer a local paper covering the council meetings and school boards, I encourage you to consider more deeply what has been lost and what can be done to bring the journalism back to life one community at a time.

The best journalists listen. The strongest communities tell their stories, if not for themselves, for their children.

As journalism goes, so goes democracy.

See also: worldnewsday.org. David Walmsley is the creator of World News Day, past chairman of the Canadian Journalism Foundation and editor in chief of the Globe and Mail, Toronto, Canada.