Lynch Law – Frank McNally on the ‘mysterious’ death of a Limerick republican, 100 years ago this week 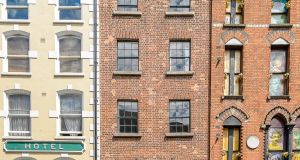 John Lynch was shot dead by a raiding party of self-described ‘military’, who later claimed they had acted in self-defence. The hotel’s night porter told a different story.

In its “From the Archives” section on Wednesday, the London Times mentioned the strange circumstances in which one John Lynch, from Kilmallock, Co Limerick, met his death in Dublin 100 years ago this week.

A Sinn Féin councillor and solicitor’s clerk, he had been staying at the Royal Exchange Hotel in Parliament Street. But in the early hours of September 22nd, 1920, he was shot dead by a raiding party of self-described “military”, who later claimed they had killed him in self-defence when he fired first, a verdict confirmed by a short official inquiry.

The hotel’s night porter, however, told a different story.

Answering the door long after midnight, William Barrett had been met by 12 men in military caps and “long black Burberry coats” who demanded entry. Once inside, they inspected the register, found the name they were looking for in Room Six, and went upstairs, except for one who held Barrett at gunpoint, facing a wall.

Some minutes later they left, and so little disturbance had there been that the porter resumed his routine until two police constables arrived “to take charge of the body of the man who had been shot”. This, Barrett said, was the first he knew of any gun battle, which guests in neighbouring rooms had somehow managed to sleep through.

It is noteworthy, given the British army version, that even the Times’s 1920 report refers to the incident as a “mysterious crime”. Someone who would have agreed with the second half of that description, if not the first, was Countess Markievicz.

Only this year – in March – Bonham’s Auctioneers offered for sale a letter of hers from the period, written to a cousin in Australia while she was “on the run” and undated except by its references to the events of this week in 1920.

“The English have lately organised a terrible force to try & exterminate us,” she wrote. “We call them the Black & Tans . . . They have just looted and burnt down Balbriggan, a small town near Dublin […] They [also] forced their way into a Dublin hotel two nights ago & murdered a visitor in his bed. He was Mr Lynch, a member of the County Council at Kilmallock”.

Lynch had been in the city to meet Michael Collins and hand over £23,000 raised as part of the First National Loan.

Another reason he might have been of interest to Dublin Castle was that his legal firm had been working for the defence of those charged with the Knocklong Ambush, in which two RIC officers were killed. It has also been suggested that his crime might just have been to have the surname “Lynch” at a time when another East Limerick man, Liam Lynch, was one of Munster’s most notorious IRA commanders.

Already, in August, crown forces had shot dead a James Lynch at Hospital, near Kilmallock, in an apparent mistake of identity.

In any case, one of the consequences of the hotel shooting was to prove the effectiveness of Collins’s counter-espionage network and in particular of an informant he called “Lt G”, or the “Little Gentleman”, even though she was a woman, Elizabeth “Lily” Mernin.

A shorthand typist in the Castle, Mernin was soon able to tell him the names of some of those involved. According to historian Brian P Murphy, writing in this newspaper in 1997, she said that a Capt Baggallay, stationed at Ship Street Barracks at the castle’s rear, had received a phone message at 1.35am that night and then ordered a car to collect some of those involved. She also told Collins that a Lieut Angliss had been one of the raiders. Both of those were to be among the British agents killed in the early hours of “Bloody Sunday” two months later, after which Collins informed John Power, the Kilmallock solicitor for whom John Lynch had worked, that “we got those responsible”.

Although it closed in 1969, the Royal Exchange Hotel lives on in Parliament Street thanks to one of Dublin’s finer “ghost signs”, which survived the redevelopment of the area as modern Temple Bar. The building for which it was named has long been City Hall, but still overlooks the southern end of Parliament Street a short distance away.

And next door to that now, emphasising the deadly intimacy of the War of Independence, is a commemorative plaque near a recessed entry to Dublin Castle.

It remembers three IRA men – Dick McKee, Peadar Clancy, and Conor Clune – who were arrested on the night before Bloody Sunday and had the misfortune to be in the castle later that day when they died, supposedly – in the dread phrase – while trying to escape.