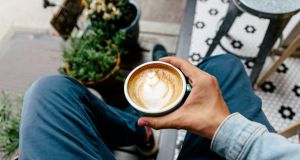 “The wind had been blowing from the north overnight, so that for once, the café should have been well sheltered.” Photograph: Getty Images

The ban on indoor dining has added to a dilemma I had already, whenever choosing a café in my immediate neighbourhood. There are two beside each other: one a part of the Insomnia chain, the other independent, run by a Romanian couple.

And as well as having marginally better coffee, in my opinion, the latter also seems like the better cause. It was there first, for one thing.

But against that, the Insomnia has certain key advantages. It’s bigger, so easier to hide in. It’s L-shaped (so ditto). Above all, it’s on a corner, as the ideal café always is.

Being able to see in two perpendicularly opposed directions adds to the drama of watching the world pass by outside. And in this case, the views are east and south, which also means that sunlight follows the windows around during the day.

You can have too much of that sometimes, when a high sun beams in through the glass, like the spotlight in an interrogation room. They could do with blinds, something conspicuously missing.

But that’s not a problem outdoors, obviously.

For a while after the Insomnia opened, I made a point of not going there, in favour of patronising the smaller original, which faces south only (with most of the view comprising the apartment block opposite).

My loyalty wasn’t helped by the proprietors’ introduction, within hours of the competition’s arrival, of soft furniture. I much preferred the hard seats, which had exactly the right elevation vis-à-vis the tables and any reading material there.

Now I found myself sinking too low in the new, improved armchairs, except for one or two with stiffer cushioning, but I could never remember which those were without trying them first, which made me feel like an oversized Goldilocks. That’s another thing that hasn’t been a problem of late. They can’t put the soft seats outdoors, happily.

The issue these days is something I mentioned here recently in relation to outdoor dining generally: the wind.

As I noted then, especially for those of us who still like to read hard-copy newspapers, calculation of wind strength and direction has become as crucial to the choice of café as it would be if you were putting to sea in a boat.

Alas, this is where the Romanians are again betrayed by their location.

The prevailing wind in Ireland is usually from the west or southwest. And because the café faces onto a canyon-like space between apartment blocks, one facing south, the other north, with both ends open, the effect is like a wind tunnel.

If you’re sitting there on cold days, you need multiple layers, and the wind will still go through you for a short cut.

My new rule is that, in calm weather, I go to the small café, while on other days, I flee around the corner to the opposition’s east-facing tables.

But of course, there are fewer calm days, which means I must err on the Romanian side occasionally, as I did this week to my cost.

The wind had been blowing from the north overnight, so that for once, the café should have been well sheltered. Only when I sat down did I notice that we were now dealing with a brisk easterly.

It was still more or less pleasant for sitting outside, although when pouring milk in my coffee during one of the occasional gusts, I had to make similar allowances as if kicking a penalty in Lansdowne Road; starting from slightly outside the mug and trusting the wind to bring the milk in.

As for the newspaper, I had to pin down three of the four corners: mug and saucer at bottom right; sugar bowl top right, jug bottom left. I would have secured the fourth corner too had I not run out of tableware. But the ship seemed reasonably secure at that point, even if turning pages was dangerous.

Then the limitations of my anchorage were cruelly exposed.

Another no-warning gust swept the miniature jug off the table, drenching my budget supplement in the process, and emptied it into the bag of shopping I had placed directly underneath as if to collect it.

In the meantime, the paper’s middle section blew away. Before you could say “news travels fast”, it had reached the street corner, where a pedestrian caught and returned it.

I reassembled both newspaper and my dignity as best I could but abandoned all further attempts at reading.

A winter of this kind of thing now stretches ahead, gloomily. And reluctant as I am to demand more furniture from the café owners, I fear we may need to consider introducing Perspex screens.