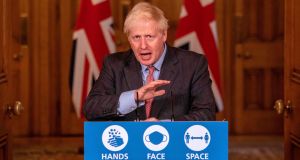 “I doubt there have been any actual ploughs in Boris Johnson’s life.” Photograph: Jack Hill/AFP

In the Methuen Book of Poems for Every Day, the month of October opens with a verse about ploughing. Well, sort of: It’s Patrick Kavanagh’s October, and is really about spiritual rebirth in late middle age. But the closing lines evoke a memory of youth and autumns past: “It is October all over my life and the light is staring/As it caught me once in a plantation by the fox coverts./A man is ploughing ground for winter wheat/And my nineteen years weigh heavily on my feet.”

It is October all over everyone’s life these days with, regardless of age, Covid-19 weighing heavily on our feet.  Not even ploughing has escaped, it seems. The big trade show that accompanies the National Ploughing Championships had been long ago called off, for obvious reasons. But the actual competitions were still to go ahead until recently. Ploughing is well suited to social distancing, after all. They don’t call them “lonely furrows” for nothing.

Alas, I see from this week’s Farmer’s Journal that the new restrictions imposed on Donegal have persuaded organisers to call the competitions off too. Thus another great annual event bites the dust. And now Covid has even undermined a popular phrase meaning to persist with something, however difficult. I mean, of course, “Plough on.”

The latest of a record number of books I’ve had time to read this year, by coincidence, is Drive Your Plow Over the Bones of the Dead, by 2019 Nobel laureate Olga Tokarczuk.  That’s not really about ploughing either. It’s more a murder mystery and takes its title from a quotation by William Blake.

But in translating the Polish, the publishers chose the American spelling of “plow”.  And this must also explain a phrase I was surprised to see in the text. It’s used by the protagonist, a 60-something eccentric and animal rights vigilante who, explaining how she gets away with certain things, says: “No one remembers meeting old biddies like me”.

Having thought that biddies, old and otherwise, were an Irish phenomenon, I went digging in the dictionaries and found that the term is considered “American-English”, but with a sub-plot involving Ireland. It seems there was an older English word Biddy, meaning “chicken”, that by the 18th century also became a derogatory term for certain women. But just when that was dying out, it was revived in the US by an influx of Irish female emigrants, who were typically employed as housemaids and usually named “Bridget”. In their own way, the Irish Biddies colonised America, in the process reinvigorating an old word. Their continuing social rise now extends to inclusion as anti-heroines in the work of Nobel prize winners.

One of the more preposterous classical allusions perpetrated by Boris Johnson, as recorded in a new book called The Borisaurus, was in an answer to a question some years about his leadership ambitions. Pretending reluctance, he nevertheless agreed that “if like Cincinnatus, I am brought from the plough”, he would have to accept.

The reference was to an ancient Roman hero, who because of a family scandal, retired from public life, sold most of his land, and became a small farmer. Then a great crisis descended on Rome and a desperate senate pleaded with him to become leader. He was stripped to the waist, while ploughing, at the time. But he agreed, returned to Rome, and saved it. Then, when his specified term elapsed – this is the hardest part of the legend to believe – he voluntarily relinquished power and went back to the farm.

I doubt there have been any actual ploughs in Boris Johnson’s life. Although he was invited to be leader eventually, the great national crisis only set in after he took over. He has had a torrid first year. Whatever about his ploughing experience, he could probably claim to have had a harrowing one.

There is no ploughing angle in an event that takes place in the US next Tuesday, although it does involve new ground being turned. October 6th will be Ivy Day, the anniversary of Parnell’s death, to mark which The Here Comes Everybody Players of Boston are presenting a live show based on James Joyce’s short story Ivy Day in the Committee Room.

And yes, inevitably, it’s on Zoom. But the bigger departure is another advance for Irish women in America, Biddies and Non-Biddies alike.  Recognising the dramatic change in political representation in the century since Joyce’s tale, three of the main characters – Hynes, Henchy, and Crofton – will be played by women. The performance is at 3pm Boston time (8pm Irish) and admission is free.

The link to register is https://bit.ly/3mG42ND.

1 Seán O’Brien: Anger over my parents’ break-up never left me
2 Further anti-lockdown protest held in Dublin city centre
3 Sophia Loren: ‘I never had a relationship with my father’
4 We need to reverse our thinking on lockdown
5 Covid-19: Taoiseach warns ‘bumpy roads ahead’ as 859 cases and four deaths reported
Real news has value SUBSCRIBE