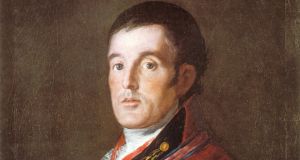 Francisco Goya’s portrait of the Duke of Wellington. The National Portrait Gallery, London

Still on Athy, whose Dreamland Ballroom we were discussing yesterday, readers may recall that the same Kildare town is also the backdrop for one of the great anti-war ballads, Johnny I Hardly Knew Ya. As sung by the Clancys and many others, its setting is “the road to sweet Athy”, where an unnamed but “doleful damsel” meets her lover, or what’s left of him, on his return from fighting for the British Empire in faraway “Ceylon”.

But on my own (virtual) travels of late, I came across a curious take on the song from that island, (now Sri Lanka), which, coming in the same week we read Jon Bon Jovi’s account of Bono’s childhood struggles against the Orangemen of Finglas, is another reminder of how this country can get lost in translation abroad.

Here’s what it said: “The song tells of a love affair between an Irish woman called Athy and Johnny who joined the English as a mercenary to fight against the Sri Lankans, leaving his love and her illegitimate child behind. The soldier returned home as a casualty […] He had lost his legs, arms, eyes and his nose and Athy hardly recognised him . . .”.

In fairness, as seen from Colombo, there is a thin line between “Athy” and, say, “Cathy”.

And you can see the logic. But they can’t have tried singing the ballad, surely. The shift in syllable emphasis would be fatal to the ironically martial metre of Johnny’s retreat, not to mention the rhyming scheme.

Poor Johnny notwithstanding – and perhaps I should have left out the “with” in that word – Athy’s claims to fame include being the possible origin of a far more illustrious soldier of empire, the Duke of Wellington. He has gone down in history for something he never said – a joke about being born in a stable not making you a horse. But the question of where he was in fact born is much disputed, with several competing theories. And while it certainly wasn’t in a stable, his own answer was Co Kildare, which with all its horses, is near enough the same thing.

Most histories assume his birth to have taken place at the family’s Dublin townhouse, 24 Merrion Street. His mother, however – who it seems fair to assume was present at the event – put it at Number 6 Merrion Street.

A wildcard theory, meanwhile, is that he was born in neither Ireland nor England, but prematurely, on a boat between the two.

That might be apt, given the historic conflict about his identity. But the last word on the matter, at least in his lifetime, is said to have been a note he wrote on the British census form a year before his death. After “place of birth”, it read: “In Ireland – believe Athy.”

If Athy is not a girl’s name in Kildare, Bridget certainly is, after the local saint. And further to my mention here last week of how the term “Biddy” entered American English, I have received an enlightening email from Frank MacGabhann. Back in 2018, Frank reviewed for the Irish Examiner a book called Being New York, Being Irish, commissioned by Glucksman Ireland House to mark a quarter century of Irish Studies there.

One of the essays was by Hasia Diner, who described how countless 19th-century female emigrants from Ireland, often named Bridget and working as maids, led to the name becoming a noun, so that one well-to-do lady might remark to another: “I will need a new bridget next week”.

These lower-case bridgets, not all upper-case Bridgets, played an indirect role in the fight for women’s emancipation and other liberal causes, Diner wrote. By taking care of children and cleaning homes, they allowed middle-class American women the freedom to campaign.

MacGabhann’s own family history is replete with both Bridgets and bridgets, some of whom were both. It also includes a fascinating sub-plot involving another celebrity Kildare man, the old Fenian John Devoy, who was cared for in his later years by two MacGabhann grandaunts, and wrote Recollections of an Irish Rebel in their apartment.

The family still has his chair, which is “looking for a home in a museum, preferably in Kildare where he was from, or in Dublin where he swore in British soldiers as Fenians and was arrested.”

As for the Bridgets who gave their name and its derivative to American English, alas, that was a legacy of which Irish families were less proud. Its place in the dictionary came at the price of its place on birth certificates, Frank suggests: “That is why the name Bridget completely died out among the Irish in New York, including in my family.”