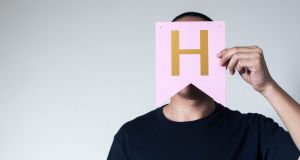 In Phoenicia and other parts of the ancient world, ancestors of what is today the letter H featured not just one but several bars across the middle, making them pictograms of a fence or gate. This may be apt because, in modern Ireland, or at least Northern Ireland, the letter is famously divisive, being often an indicator of ethno-religious identity.

When I mentioned this recently in an interview with the lexicographer Susie Dent, who had lamented the rise of the “haitch” pronunciation in England at the expense of “aitch” (traditionally standard there), she was surprised to learn the issue was a full-scale “shibboleth” in these parts.

But as I have since discovered, thanks to Sinéad Gleeson, there is a dramatic illustration of the phenomenon in a new collection of Irish short stories, The Art of the Glimpse, published on Thursday.

It’s from Bernard MacLaverty’s Walking the Dog, a tale set during the Troubles, in which a man and his dog are detained one night by two gunmen who then attempt, in the usual way, to find out which side their two-legged prisoner is on.

Unfortunately for them, his name – “John Shields” – is inconclusive and he refuses to say what school he attended. He also ducks the religion question by pleading atheism. So finally they invite him to recite the alphabet.

And he knows straight away it’s the eighth letter they want to hear. But being unable remember which is the Catholic pronunciation and which the Protestant, he drags out the first seven, playing for time. Then still uncertain, he says “aitch, haitch” hurriedly and skips ahead to I, J, and K.

The kidnappers are unimpressed: “We have a real smart Alec here, said the gunman”.

Although the story may be fictional, the only part I have any trouble believing is that a Troubles-era Belfast man would not have known which pronunciation was which. Especially since the letter H was so synonymous with a certain prison of the time that cardboard cut-out haitches (those would certainly have been aspirated) were sometimes attached to lampposts by republicans.

Anyway, as MacLaverty has since confirmed, via Twitter, the alphabet test was real: “[It] happened to someone I know and whose word I trust”.

Mind you, if the Bible can be believed, Ireland’s Troubles were a minor thing compared with events surrounding the original Shibboleth – that word itself.

The story hinges on pronunciation of its opening consonant, which has strong similarities with the “S” in Irish. Indeed, the Hebrew letter involved is called “Shin” (as in Sinn Féin).

Unfortunately for the Ephraimites, they could not make that sound.

And when, after being routed by the rival Gileadites, survivors fled for the river Jordan, they were cut off at a pass and interrogated one by one.

Each was asked to say Shibboleth: “And he said Sibboleth; for they could not frame to pronounce it right. Then they took him and slew him at the passages of Jordan; and there fell at that time of the Ephraimites forty and two thousand.”

In an arguably even more serious matter, meanwhile, it seems I owe Tigernán Ua Ruairc, the 12th-century King of Breifne, an apology for describing him here on Wednesday as a “Cavan man”.

My only excuse for such intemperate language was that Cavan is known today as the “Breffni County” and is full of O’Rourkes.

But as I should have realised, the old Breifne extended well beyond the point where the Cavan panhandle now reaches forlornly for the sea. It also included the northern part of Leitrim. Its capital, and Ua Ruairc’s castle, was at Dromahair.

Our modern county boundaries came in with the Normans, whose invasion Ua Ruairc only just lived to see, although he played an unwitting role in it.  Years earlier, his wife Derbforgaill had been kidnapped by Dermot MacMurrough, creating an enmity that led to MacMurrough’s eventual expulsion from Leinster. It was in seeking military help for his own revenge mission that MacMurrough brought the Normans over.

In an ironic twist, the essentially English county borders are now policed by the GAA. I, for example, grew up in Monaghan, across the peace-line from Cavan, our deadly enemy because of Gaelic football.

And yet, funnily enough, I went to school with a Breffni O’Rourke, who had a brother Tiarnan and a sister Dearbhla.

Their parents were keen history students, clearly. But the other funny thing is that our classmate was rarely addressed by his ancient name. We just called him “Ollie”, after his father, a semi-legendary figures who had been full-back on the Monaghan football team that won an All-Ireland Junior title in 1956.

Kings of Breifne, eat your hearts out.