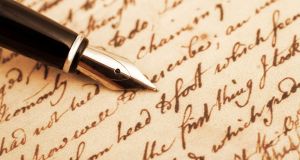 F Julia Bolton, a writer who enjoyed modest fame, is now utterly forgotten, even in the part of Ireland were I grew up, which is where she lived too. Photograph: Getty Images

F Scott Fitzgerald we have all heard of, and most of us could say what the “F” stood for, without having to check. But F Julia Bolton, a writer who enjoyed modest fame during the same era – surely Fitzgerald was an influence on her name? – is now utterly forgotten, even in the part of Ireland were I grew up, which is where she lived too. The “F” stood for “Florinda”, of all things. And if she felt the need to suppress this suggestion of floweriness, it doesn’t seem to have affected her poetry, which exulted in nature and is probably a bit too florid for modern tastes.

Indeed, it was only while reading up on another recent subject here – the damson orchards that once proliferated along the Meath-Monaghan border (Irishman’s Diary September 24th) – that I found F Julia, in a manner of speaking, wandering among them.

Unlike Peter Connolly, who got drunk on damson wine, she got drunk on the mere sight of the trees’ blossoms, one of the glories of the area then. “Damson orchards ever white/Cool grey skies and April/Of eternal Spring,” she wrote in a poem of 1920, The May Wind of Manaanmore.

That earned her the “Half Guinea” prize in the Sunday Independent’s weekly poetry competition. But she also wrote plays, staged in Belfast and Dublin, and at least one novel. After her death in 1932, alas, this newspaper’s silence about her is broken only by her inclusion in a 1970 list of writers for whom the Irish University Press was inquiring about copyright.

The most interesting thing about F Julia Bolton now, arguably, is that she ploughed similar ground – if only, in her case, metaphorically – to Patrick Kavanagh, who as a young man must have known of her, and may even have envied her habit of winning ten-and-sixpences from the Sunday Indo.

Bolton’s Donaghmoyne and Kavanagh’s Inniskeen are not just near-neighbours but also enjoy an intense rivalry sharpened on the whetstone of the GAA. This was a sub-theme of Kavanagh’s 1950 elegy on Monaghan football, “Gut Yer Man”, in which he quotes his own mother as taunting him over Inniskeen’s alleged inability to beat the Fontenoys: “Yous were never able for Donaghmoyne – with all your bummin’.”

She didn’t need to confer mythical status on it. It had a storied history already as the site of an ancient Gaelic stronghold

Not only does he accept this damning verdict without argument, he also quotes an unnamed local bard seconding the motion: “Then Inniskeen Came on the Field and they were stuffed with pride/They fell before the Fontenoys like grass before a scythe.”

We can safely assume that F Julia was not the bard who wrote those lines. GAA was not one of her themes. But the hills of Monaghan were. And in Manaananmore, she had one to rival Kavanagh’s Shancoduff.

Unlike him, she didn’t need to confer mythical status on it. It had a storied history already as the site of an ancient Gaelic stronghold, at the centre of the Kingdom of Oriel, on which the Normans later built.

In other respects too, it had an edge on Shancoduff, whose very name (“duff” being from the Irish for “black”) betrays its northward aspect, facing away from the sun. By contrast, Bolton’s poem begins: “The May wind on Manaanmore/Blows from the South,/And it presses strong, wild kisses on the mouth/It comes o’er the valleys deep/Where are folded in the sheep/Flying free to Monaghan’s hills/From plains of Louth.”

Then there was grass, falling before the scythe or otherwise, which was Manaanmore’s crowning triumph. Even today, I’m told by Art Agnew, veteran Kavanagh country tour guide and general savant, that the land around Mannan (as it’s now usually spelt) is “pure limestone” and made for pasture. “If a farmer was trimming hedges on a summer evening and forgot to take the fork or the billhook home, he wouldn’t find it the next morning, the grass would have grown so fast.”

Clinching evidence of this is that F Julia’s husband – “Major Bolton”, a former High Sheriff of Monaghan – had lands not only in Donaghmoyne, but also on the aforementioned plains of Louth, at Castle Ring. He kept his cattle in Louth during the earlier months of the year, but in autumn, he always “finished” them at Mannan, “much to the annoyance of Louth farmers”.

So much for the stony grey soil. But perhaps it wasn’t only Louth farmers who were insulted by this migration to Donaghmoyne’s lush pastures. Inniskeen lay between those grazing lands. And in the poem Shancoduff, the farmer-poet’s heart is stung by the imagined question of cattle drovers, looking up from their shelter in the “Featherna Bush”, and wondering: “Who owns them hungry hills/That the water-hen and snipe must have forsaken?”